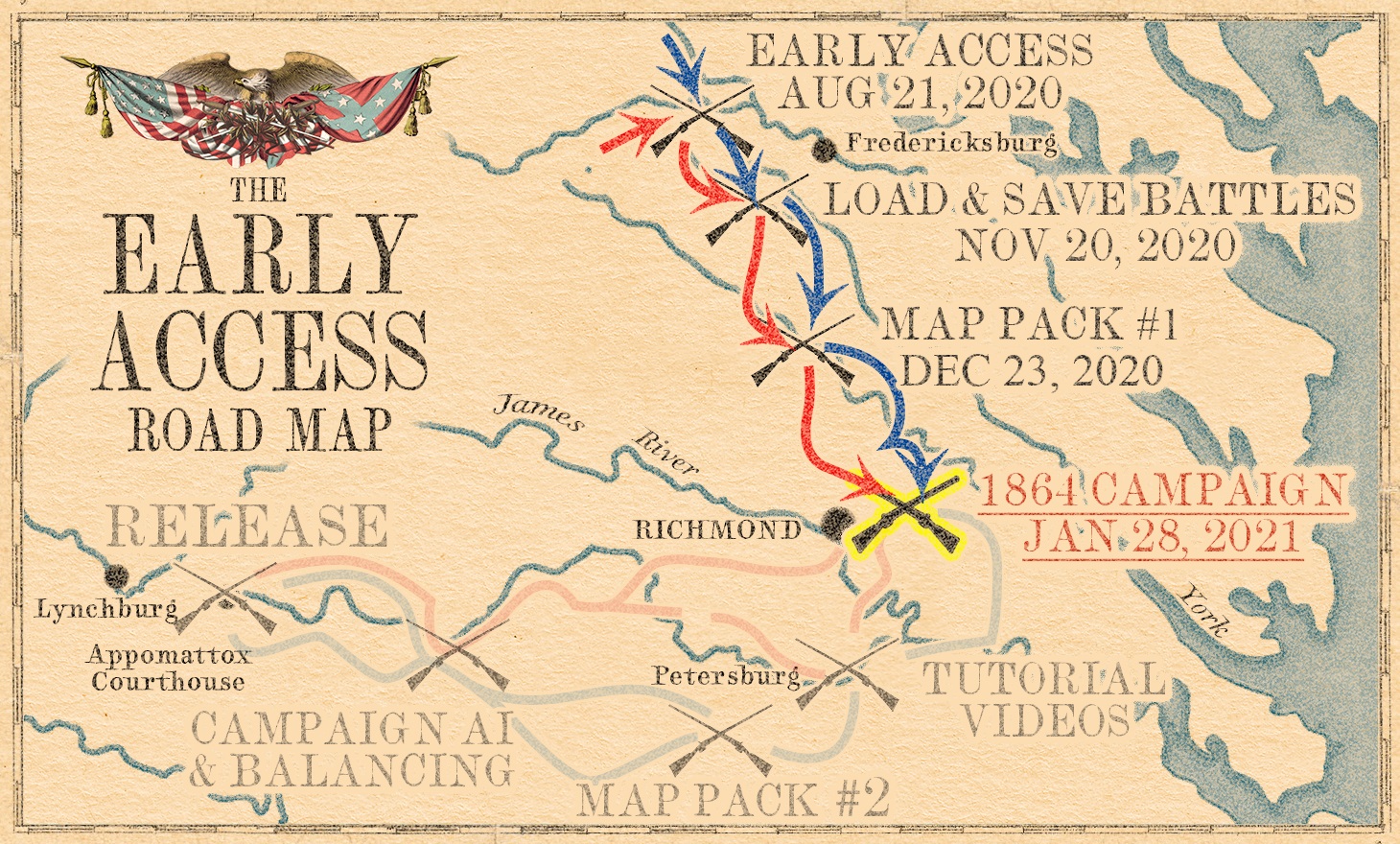 Grand Tactician: The Civil War (1861-1865) was launched in Early Access on Steam on Aug 21, 2020. Early Access means the game is not yet in its final, intended form. Instead, we want to improve it further before calling it “ready”. By purchasing the Early Access version (for a discounted price), the player can already play the game, but for a more complete and polished experience, it is recommended to wait for the full release. If you’re marching with us with the Early Access release, the going will not be smooth and there will be many hardships along the way. But, instead of turning back when facing adversity, the march will continue until the final victory – the full release of the game – is achieved!

During the Early Access period, we will follow the Road Map shown above. The Road Map steps are not in order of priority, but represent the order in which the missing features and content are finished. We will tackle the bugs and main feature improvements from the start.

During this time the other team members will be adding the content, which did not make it in the Early Access version. This includes, among other things, more commander portraits from Peter, further improvements in the campaign map, game balancing, maps, scenarios, and so on. The main steps on our march to victory, the final release, are listed below:

Load & Save for Battles – Victory Achieved on Nov 20, 2020!
One of the most important and requested features. As the battles take a long time to play, it is only fair that the player can save the progress to continue playing later. This feature has been added to the game along with unlimited saving for campaigns.

1864 Campaign – Victory Achieved on Jan 28, 2021!
The late war campaign scenario starts in May, 1864. Union armies are preparing to launch decisive campaigns to defeat the Confederate armies. Union commanding general Ulysses S. Grant is leading armies in the East to invade Virginia, to defeat Lee’s famed Army of the Northern Virginia, while his trusted lieutenant William Tecumseh Sherman is to move with his armies to defeat Johnston and take Atlanta, Georgia. The odds are heavily favoring the Union, but with the presidential elections closing, severe setbacks in Lincoln’s war effort may demoralize the people. If Lincoln is not re-elected, the Confederacy has a chance to enter peace negotiations, eventually preventing the nation from being overran by the northern armies. The campaign also includes new historic battles – Olustee, Wilderness and New Market.

Tutorial Videos:
As the game is very complex, it can be easy to lose oneself in all the details and different functionalities. We have started adding tutorial videos, produced by the one and only History Guy Gaming! First videos can already be found in the game, and more will follow.

Map Pack #2:
This package will include a number of maps that will be randomly picked when fighting in regions where historical battle maps are not present. The functionality of the feature is already in, tested and it works, but the number of maps will be expanded to allow more diverse battle fields across the continent.

Campaign AI & Balancing:
This work is already underway, with each patch in beta also addressing these issues, but we are determined to improve the campaign AI and campaign experience a lot further. The campaign is what our game is all about, and we really want to make it the best we can!

After the Early Access release, we will keep the players and followers up to date about our progress by updating the Road Map. After the final step, the march will be over, and the final version of the game released. We welcome you to join us on this march! With the updating Road Map it should be easy to see the progress!