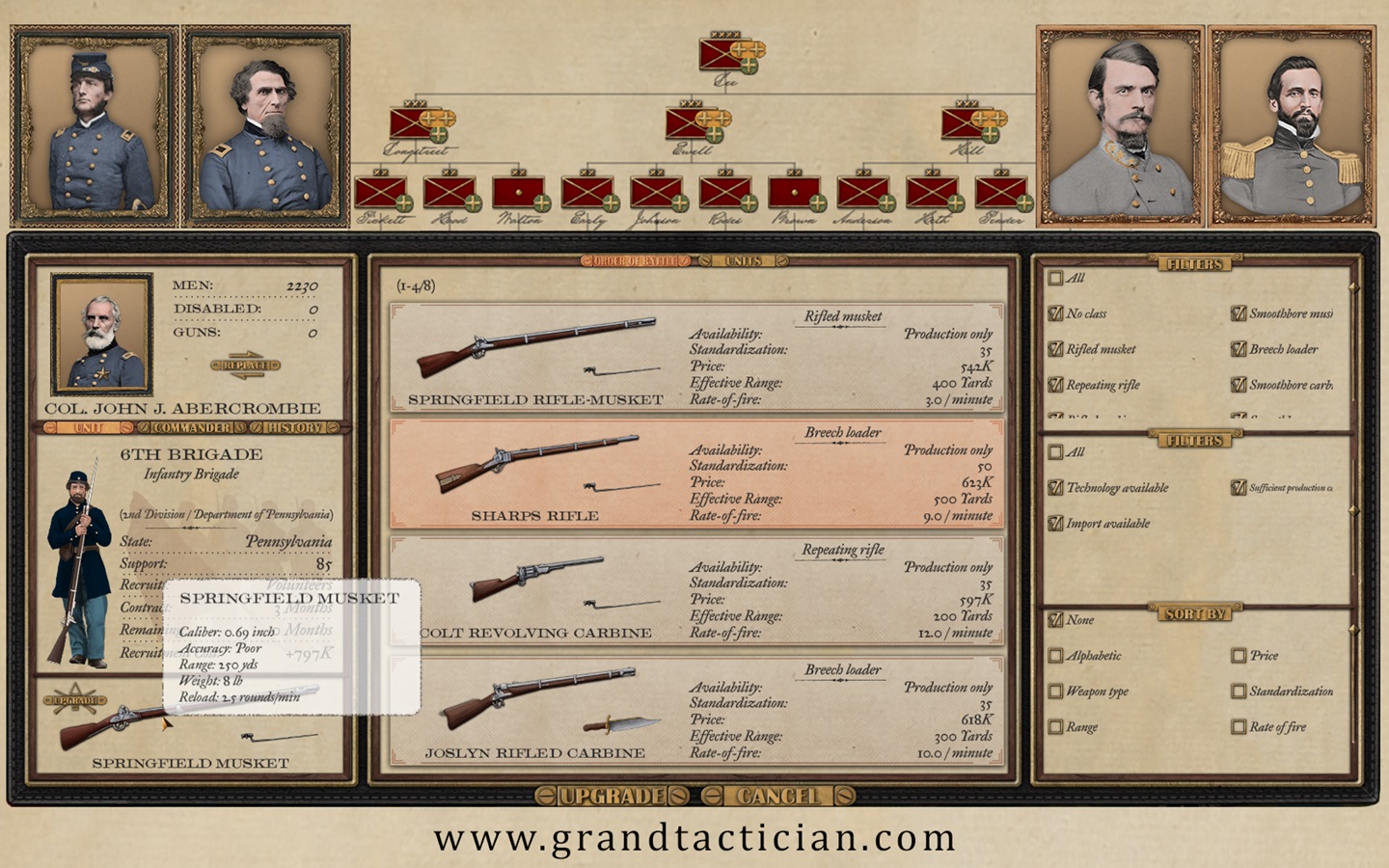 Grand Tactician: The Civil War (1861-1865) was released in Early Access two months ago. On August 21 we marched straight into the Wilderness, and have been fighting ever since. After desperate fighting and even some repulses, the advance continues. The game is being improved all along, and recently we have started adding content that has been requested by the Early Access players!

After August 21, things have advanced with Grand Tactician. During the first weeks after the release we have been dealing with major bugs, crashing, corrupted save files and even a nasty memory leak. But we’re happy these major issues are already behind us, and even as there is still a lot to do, the game is stabilizing. Plugging the memory leak was one of the more tedious projects so far, but now we have been able to focus on game play, AI and balancing, and producing additional content – on our way towards the full release of the game.

We have received a huge amount of bug reports, save files and logs, as well as feature requests from our Early Access players along the way. We have logged and prioritized them and are working through the list to constantly improve the game. Development patches have come out every 2-3 days, while official patches have been released weekly, on average. While first patches were focused on technical issues and stability, lately the point of main effort has been in campaign and battle game play.

While the team uses 90% of available effort in bug fixing and balancing the game, we have also added in playable content. Early on the 1863 summer campaign scenario was added, with a bonus summer 1861 scenario released a bit later, and just now we also added one more historic battle in the mix – the 1864 Battle of Olustee in Florida. This is the second regimental level battle, along with Wilson’s Creek, and the battle preferences have also been re-balanced in these two battles to improve playability and AI performance.

At the same time we have started adding more maps in the game, integrating them in the campaign map as well. The recently added maps are the before mentioned Olustee (FL), along with Cumberland Gap (KY) and Honey Springs (Indian Territory, modern OK). More maps are in the making, and will be sneakily added in the game with the coming patches. And while I have been adding the maps with our paper map artist Wasel, Peter has added more commander portraits and soldier images. Though, it does not help in his task that more commanders have also been added, the number now standing at 1591.

After resolving the major crashing issues we have slightly diverted from our Early Access Roadmap due to player requests. We have already added a number of player requests, like moving Headquarters units only, saving of filter settings and most recently unlimited campaign saving option and (optional) reworked battle objective system. More subtle changes have also been made according to feedback, like some changes in the campaign map, some font changes, pause default settings or game balancing.

As per our EA Roadmap, the steps described are already being taken not one by one, but simultaneously. While the first new maps, along with bonus battles have been already added, the work on the 1864 campaign is also ongoing, as is the work on allowing mid-battle saving and loading. We are also happy to announce that the first tutorial videos are being worked on by a renown history enthusiast and wargame YouTuber. The manual is also being planned with an American author and editor, who is a huge Civil War enthusiast. Like said, while more content is being created, the main focus is still in bug fixing, balancing, AI and performance improvements.

There are a number of larger topics that the community has requested so far, like scalable UI, hotkeys, or further game play options. These we have stored on our list and will start implementing them once we have advanced further with bug fixing and adding playable content.

We believe it’s a good idea to work with the community this way, even if it means the full release of the game may move further into the future this way – the Early Access players have been very encouraging and patient towards us, providing great feedback and cool new ideas. At this point we want to thank all the Early Access buyers for the continued support! The march to victory continues, even if there has been some setbacks along the way.