Who Are the Grand Tacticians? 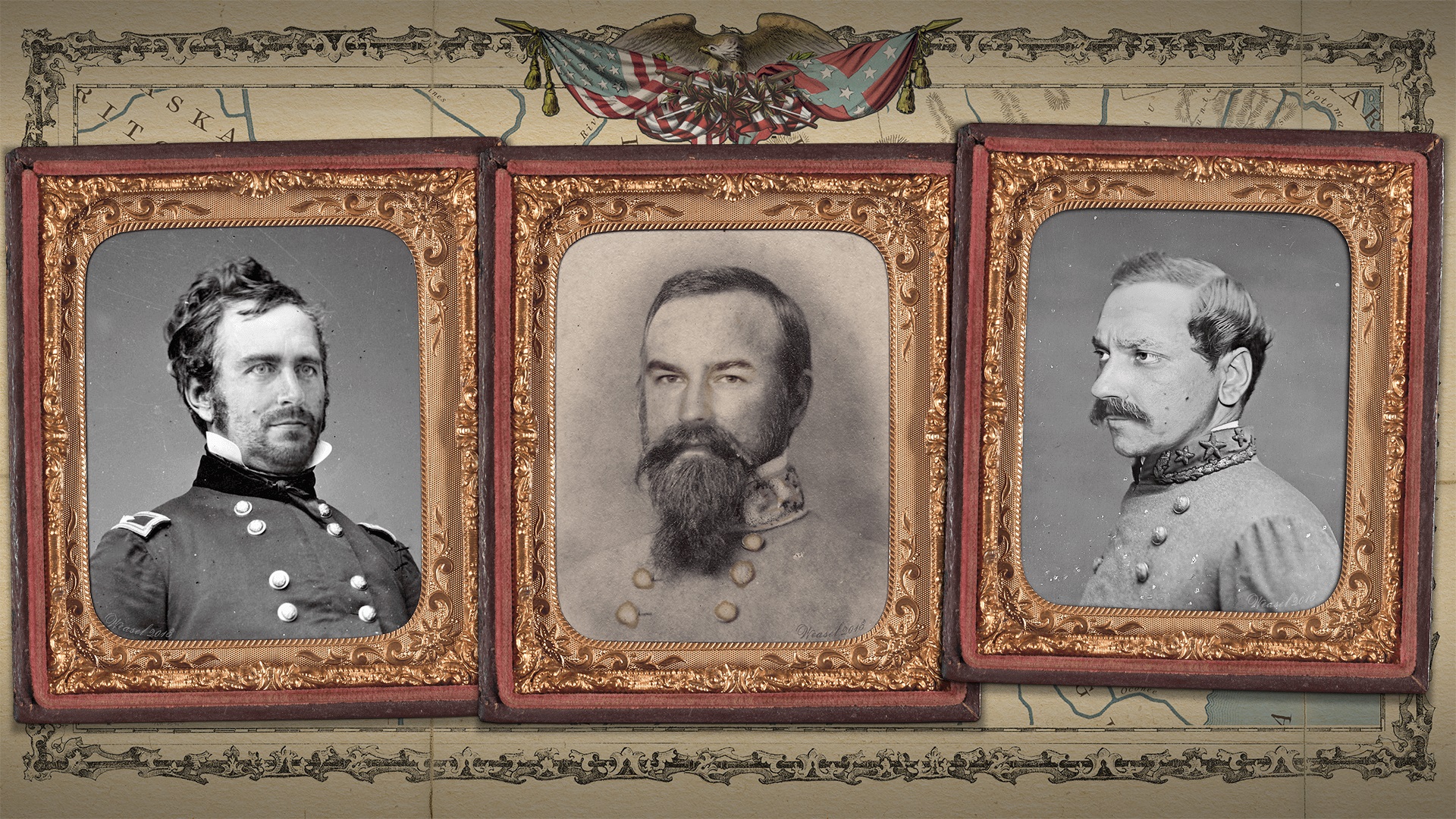 As Grand Tactician: The Civil War (1861-1865) release is getting close, it’s time to take a look behind the scenes of the game’s development, and to introduce the core team of people behind the project. It’s safe to say, that the development of this game has been very different compared to the game dev industry norm. And it will continue to be so.

From Eager Amateurs to Determined Veterans.

In 2016, two men in Austria were thinking to themselves, that the strategy game niche was missing a game. The American Civil War is a very interesting topic to read about, and to learn about, but no-one had made a comprehensive game about the whole war. Of course there are the great titles like Sid Meier’s Gettysburg, AGEOD’s Civil War II, and more recent Ultimate General, and so on. But one title to grasp the story and the operational level of the conflict was still missing. There and then a decision was made to create one.

Oliver Keppelmüller, a 40 years old treasury banker from Austria, had already tried his wings in game development. He created a strategy game called The Seven Years War (1756-1763), alone, from scratch, releasing in late 2015. This game received 2 DLCs during 2016, expanding the battle game-play and adding a Swedish themed campaign of the Pomeranian War.

TSYW, as it’s called among friends, already included the elements that would be the cornerstones of Grand Tactician: strategic campaign layer with simulation of economy and military management, and a tactical battle layer where battles are fought when armies meet on the campaign map. The game also includes historic battles from the war, and a custom battle generator. Though, the dream was always to make a game about the American Civil War. (“I tried to create a Civil War strategy game since the mid 90’s in different coding languages and engines, but never finished… until NOW.”)

Ilja Varha, now a 36 years old Finnish Army officer and a military history buff, ran into Oliver’s game while working for a gaming magazine as a freelance writer. While the game was rough around the edges, it was very intriguing, as it did many things right, that other games usually ignored. Ilja, with a history of modding, wargaming and simulators, both entertainment and military use, got involved in Oliver’s project and designed the Pomeranian War DLC. It was after the release of this DLC that the seed for Grand Tactician was planted.

Peter Lebek, a 41 years old Control Room Operator in the Chemical Industry in Germany, joined the team in 2017 plugging a gaping hole in the team’s line. Now we had a full-time artist to improve the game’s visuals, especially the UI. Peter was previously involved in the Europa Barbarorum II mod for Total War, creating units and coding.

There was but one problem: none of us was a professional game developer within the industry, making a living developing games. This was, and still is, a caveat in a way: making the game would not make a living, so the development would need to take place during spare time, after the workdays and while supporting the families – Oliver and Ilja both had their first child right after the development started, who are now 3 years old, while Peter’s son is a few years older. Also during the development Ilja was accepted to General Staff studies in the Finnish Defence University, spending 2 years studying the art of war while developing the game… Even if this means time for development is always limited – and believe us when we say the boundaries have been pushed on many occasions – it also gave a freedom which professional game developers do not always have: as the game was not the livelihood, we were free to do whatever and however we wanted, without any outside pressure to make things one way or another, or by a certain date.

While inexperience made certain things difficult at first, during the years we’ve learned more than a few things while creating the game. But the most important lesson is that with the freedom we’ve enjoyed, we’ve been able to develop the game our way. And from the feedback we’ve received from the followers of the project and the game’s volunteer testing team, we’ve managed to do emphasize the things we wanted in the game design, from the historic looks and atmosphere to the realistic mechanisms that run under the hood.

The Underdogs with Future Plans.

The release of Grand Tactician: The Civil War (1861-1865) is approaching fast. But the release of the game is not meant to set the game in stone, only to be patched later on with a DLC or two released later. Instead, as the project is a true fruit of passion for us, we are determined to keep it alive, and improving it along the way.

For a gigantic project like this with the limited development time, and basically without any resources, it’s clear, that every feature we planned in 2016 is not yet included or polished. We plan on finalizing our vision by supporting the game for years to come, adding the missing features in the upgrades and patches – for free – while improving the game. At the same time we’ll keep expanding the existing content, like the number of battle-fields players can encounter in the campaign.

Post-release, the players will also have their say in the direction the project will steer from thereon. While Grand Tactician is planned to become a series of strategy games, we’re not in a hurry to go onwards with a new title, even if a few interesting ones are already discussed. Hopefully after the release we can also make the game more moddable, so fans can adjust it to their liking.

And we’re not in this alone. The Volunteers, from freelance artists to history buffs helping in research, have helped us immensely, increasing the game’s quality and atmosphere from the soundtrack recorded just for this game to the video cut-scenes and historical map drawing styles – none of this was planned in 2016. We’re humbled by the talent and morale of the volunteers, as well as the impact their work have had had on our small, but ambitious project!

So, as you can see, Grand Tactician is a true underdog in the game development industry. With full freedom of maneuver we are going to keep the project alive, improving it along the way, as we believe it could be the American Civil War strategy game for years to come. 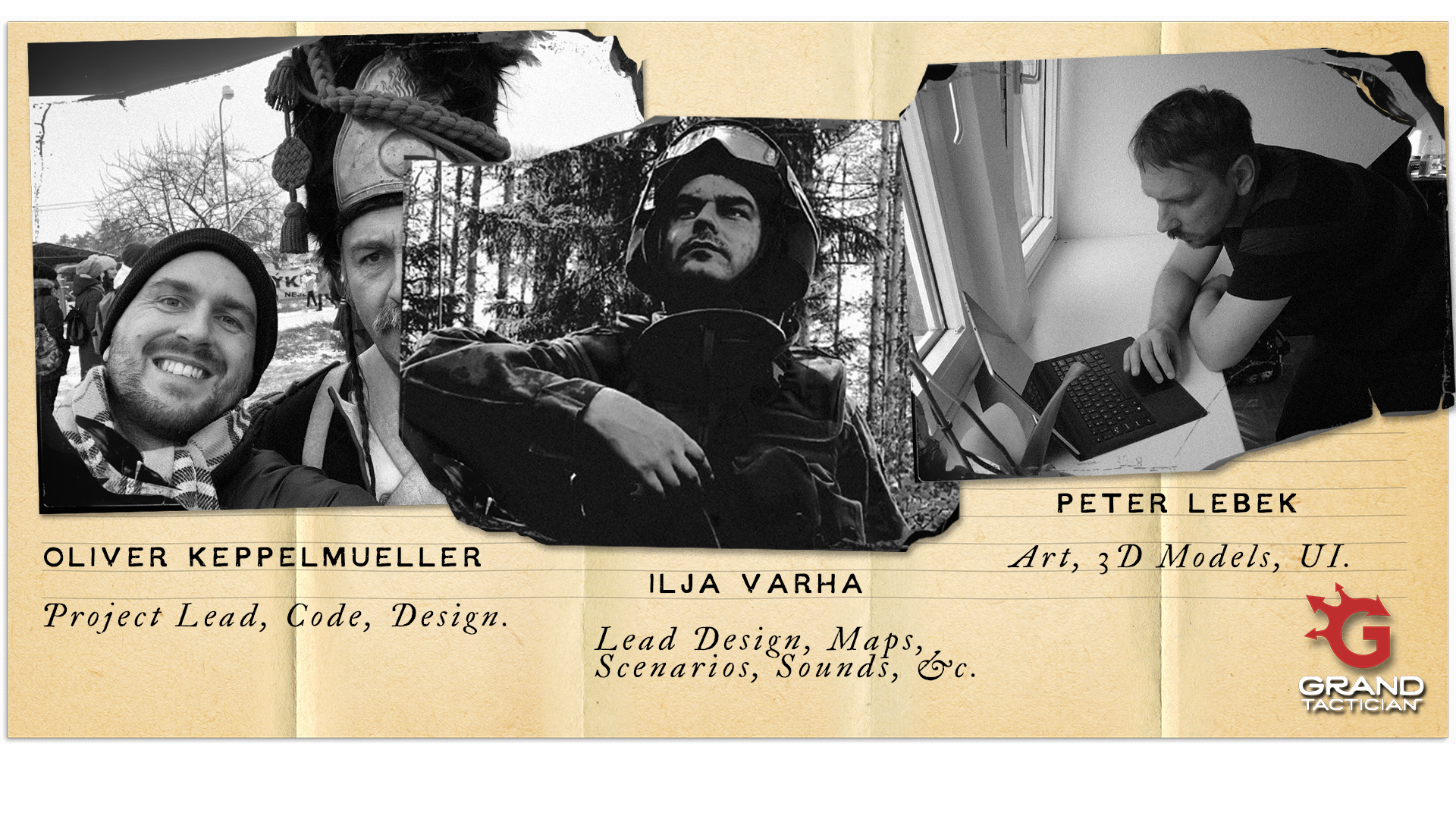 Oliver Keppelmüller, 40, Austria, treasury banker.
“I think in 0s and 1s, hardly sleep and the 100k lines of code chase me in my dreams.”

Ilja Varha, 36, Finland, officer, FDF.
“Still got some great ideas to improve the game, though Oliver said he would die of old age before finishing my list…”

Peter Lebek, 41, Germany, Control Room Operator.
“Years ago: do you know a way how to adjust 50 black & white commander photos in one shape? Last week: we have now 1400 commanders in the database and some 1000 will have a colored portrait…”