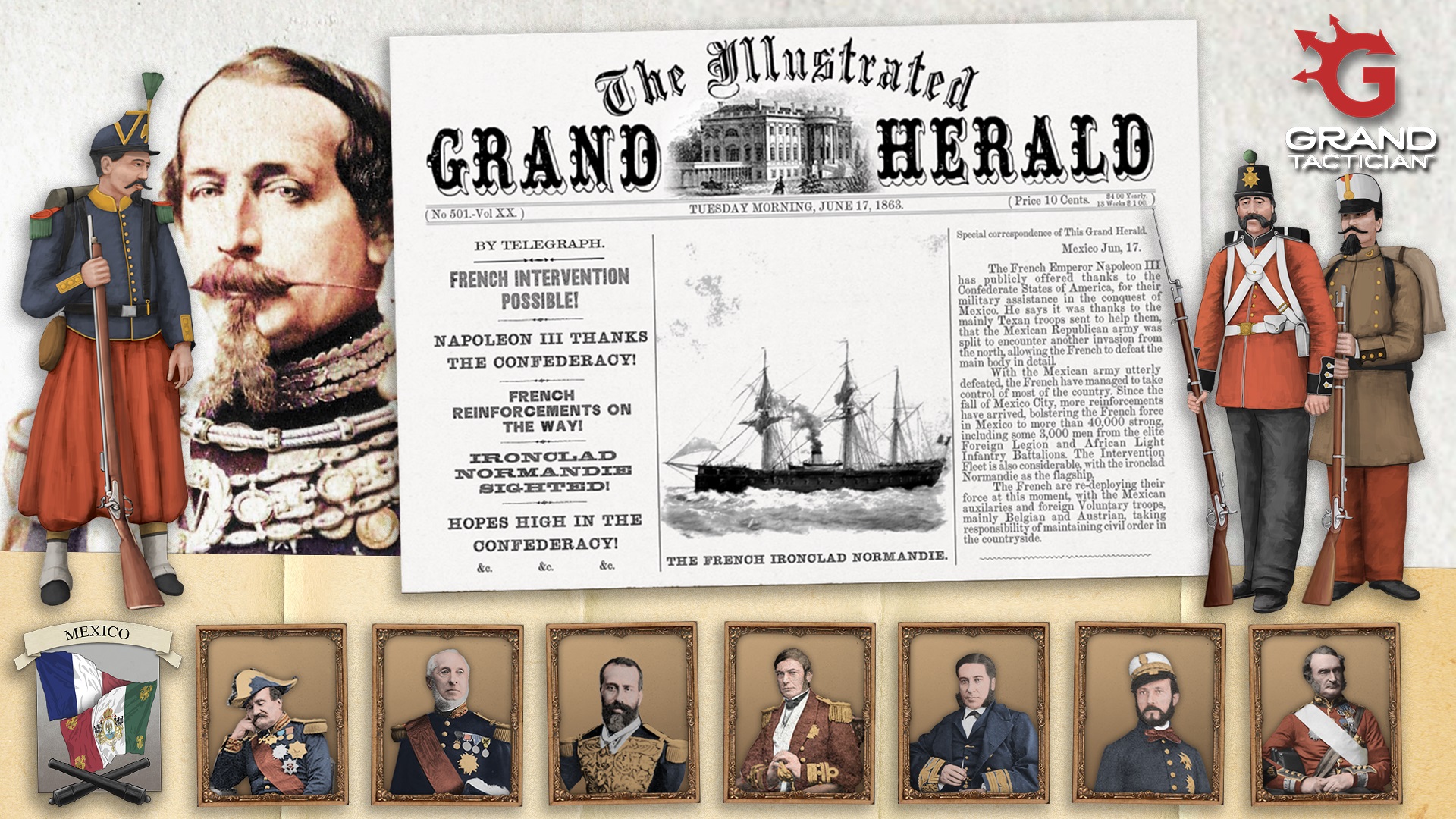 During the mid-19th Century, the United States was a world power, challenging the status of the more traditional European empires of the time. According to the Monroe Doctrine (1823), the United States would oppose any European interference in the Americas. But things have changed, with the Union dissolved, and a Civil War raging between the North and South.

In Grand Tactician: The Civil War (1861-1865) there are three European Empires, that could play a role in the Civil War. While Spain has lost many colonies in the early 19th Century, they still hold Cuba (or do they with 100% certainty?), and have the mindset of an Empire. The more prominent British and French empires are stronger, but exhausted by the Crimean War fought between 1853-1856 against the Russian Empire. In that war, where the Americans sent their own observers like one Captain George B. McClellan, warfare saw the emergence of iron plated ships and rifled muskets. The war also revealed some real problems with the traditional European military organization and tactics, usually associated with the Charge of the Light Brigade in the Battle of Balaclava.

The British, the former colonial masters and opponents in the War of 1812 still hold the Province of Canada north of the Great Lakes. During the Crimean War the regular troops from Canada were shipped to Europe, and have not returned. Instead, the province’s defenses rely on militia, with numbers and training being questionable at best. When the Civil War erupted, the British military took a neutral stance, observing the situation as it developed. This neutral stance took a sharp turn with the Trent Affair, where, in November 1861, a U.S. ship stopped and boarded British vessel Trent, taking Confederate diplomats into custody. This caused a great diplomatic uproar and the British started making plans for a possible intervention in North America, strengthening the forces in Canada and preparing an Expeditionary Force in Europe. While the British had some sympathy for the Southern cause, they remained neutral throughout the War. The existence of slavery in the South was seen as a moral issue, but cotton was direly needed in the British textile mills – a fact the Confederacy could try to take advantage of.

The French under Emperor Napoleon III had their own continental issues with Prussia, which made their intervention unlikely. While more sympathetic to the Confederacy, the French did not either officially recognize the Confederacy. But with the Civil War creating a power vacuum in North America, the French, along with British and Spanish see their opportunity to intervene in Middle American affairs. Mexico, still recovering from the stinging defeat in the war against United States between 1846-48, where they lost large part of their land, owes money to the Europeans. With the United States unable to intervene, a European expeditionary force is sent to Mexico to force President Juárez to pay. While the intervention begins as a joint European effort, it soon becomes clear that the French have far larger ambitions. The British and Spanish forces eventually withdraw, with the French pushing inland to conquer Mexico.

In the game it’s possible to try to influence the foreign relations with Europe. This is done by investing dollars in diplomacy, and also following policies that are appealing to the European nations. At that time, as Europe was exhausted by the Crimean War, feeding the citizen was a problem. The United States with their vast farmlands expanding to mid-West was a solution, and the Northern player could make the Union a true breadbasket of the world. Who would bite the feeding hand?

The Confederacy also holds an advantage, which is the majority of the world’s cotton production – at least for the time being. With industrial revolution, the textile mills in Europe need to be fed with cotton from the South. It is widely believed in Southern States that the King Cotton would be the decisive force, preventing a war with the North and bringing the Europeans to their aid if needed.

As the player you must weight the different political possibilities carefully, as you cannot be strong in all areas. During the game the possibility of an European intervention will change. And in case the Europeans are convinced that the Confederacy has a fighting chance, maybe a sympathetic nation would see their opportunity to grow their influence in North America, by siding with the South? The British position in Canada is not strong, but that direction offers a possibility to strike the Union’s heartlands from behind. A movement via Mexico would also be possible for the French, if the Mexican resistance is crushed.

The forces we use for the Europeans are such as they could have been during the Civil War. The capability to move huge armies to North America was limited, and the Europeans really understood the value of converting their fleets to ironclad ships after observing the Civil War naval operations. But they will not be a pushover, as the soldiers will be experienced and well drilled. In the image above you see some of the historical European commanders, operating in the American Theater at the time of the Civil War. If you play your cards right, you could see some of them on your side. And in the worst case, you may see some of them joining forces with the enemy! How many of them do you recognize?

P.S. After a request from a follower, we made the interventions optional. In options menu you may choose to have the Europeans remain neutral no matter what.