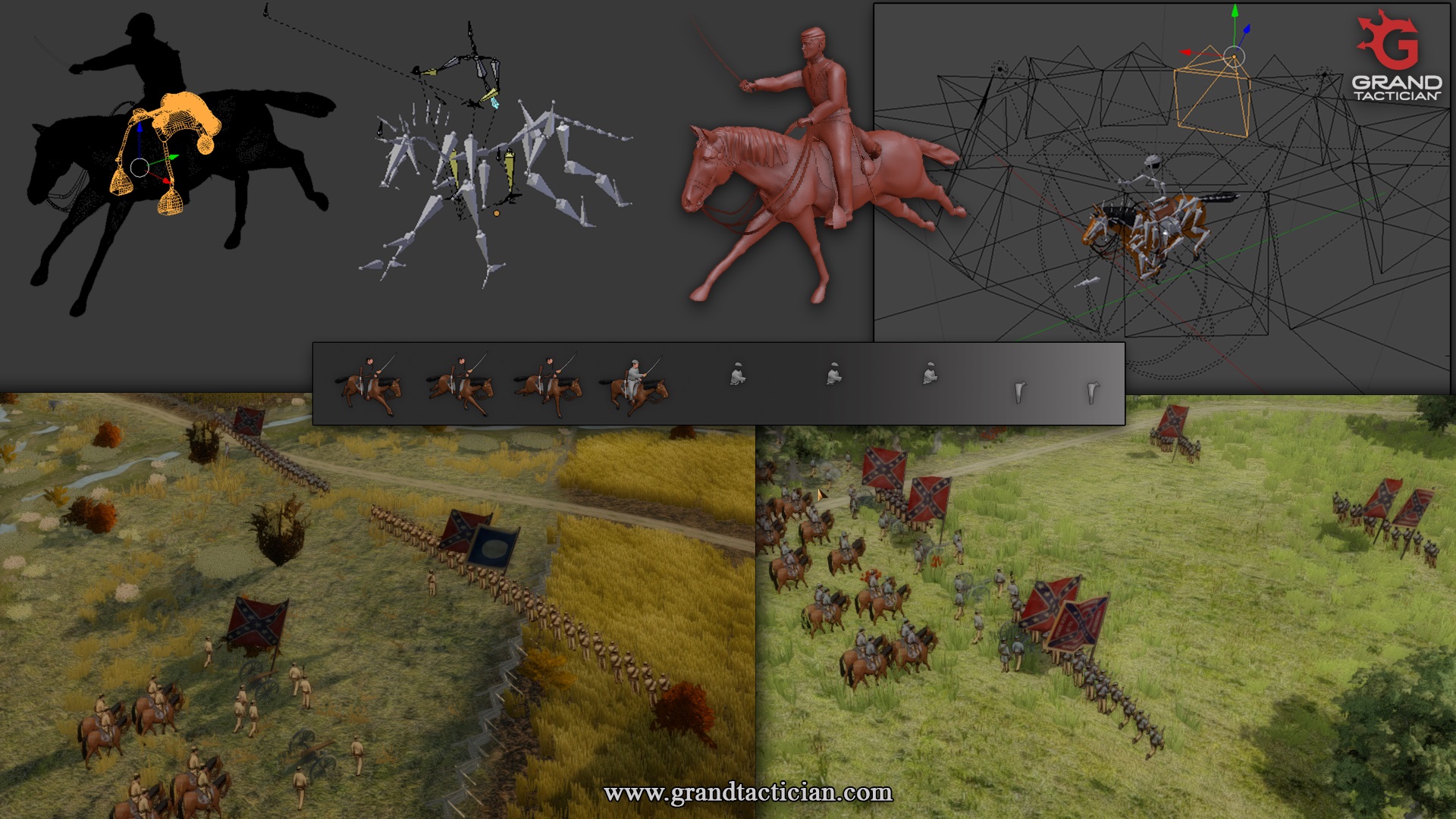 To-day’s Engineers Corps Log is all about visual presentation. We´ll take a look at where we are now, and what to expect in the future.

Hint: Click the links in the text to open images &c.

When we talk about graphics in Grand Tactician: The Civil War (1861-1865), we need to take a look at the game concepts and techniques first.

One of our main goals in the game is to show this conflict in the biggest possible scale. For the battles, this means hundreds of brigades with many thousands of single soldiers and hundreds of cannons. All at the same time, all connected in an AI matrix – and all in real-time!

Our original idea was to present this all in 3D and use low polygon models for the soldiers, horses, and artillery. Unfortunately, the first engine tests showed us the limitations. But because we still want to keep the epic scale, we decided to change our initial concept and replace the low poly models for soldiers and horses with sprites.

For this task, I created high polygon models for men and horse, with additional equipment and bone rigs for animations. Out of this, I created ~ 47 animations /stances for Infantry, Cavalry, Artillery and Others (Commanders, wounded, captured, &c.) split into three sprite sheets layers (Inf, Cav, Others). And because we wanted to have a fluid unit rotation, we “shot” every frame from 12 directions (12 cameras). This all limited the sprites to not more than 65 frames on one layer, meaning every animation or stance has limited amount of frames. On top of it, we split every sprite into 3 parts: jacket and hat/cape, trousers and all the rest. Why so? Because this allows us to color the different parts separately via code.

After all this work, the first results were rather disappointing: Blurred, low detailed and strange moving soldiers occupied our battlefields. But our daily work with the Unity engine taught us how to solve most of these issues and to-day we are quite happy with the results – not only because of the improved looks, but also due to the low impact in performance, compared to other techniques.

However, the balance between graphics and performance will always be a thin red line, and subject to improvements along the way. For those who get lost in this confusing technical part, the above title image shows a picture of all work steps and two different colored brigades.

Furthermore, we spend some time on performance optimization. This allowed us to improve the terrain as well, while improving the FPS. More objects, better LODs (level of detail), detail distance, light, camera, and more.Together with sound and smoke, we could create an intensive battlefield atmosphere, even with our very low resources.

And as always… work in progress! Testing, bug fixing and improving is ongoing all the time.

In the last months, we´ve implemented all our battlefield features and we move now with full steam ahead with the campaign map. Ilja writes the campaign concepts and Oliver integrates the basic terrain and first features, like troop movement on land, rail and water, as well as telegraph lines, as you are reading this. One of my first tasks here are the naval and land units.

Please keep in mind this is a very early phase of the campaign development and we have not yet finalized the final details.

However, the campaign game-play will have naval movement for troops, overseas trade, blockades, and naval engagements. You will command paddle-wheel steamers, battleships and ironclads, traders and blockade runners, as well as troop transports on open sea and major rivers like Mississippi. Most of the units will have a unique model for each side, like the USS Monitor or Cairo for the Union or the CSS Virginia for the Confederates.

All models will have smoke particles for engines and guns firing, plus other small nice features.

Even without a separate naval battle game-play layer (like in latest Total War -games), we´ll try to create a very exciting and important role for Naval Units and fleets. But we’ll discuss this in more detail in one of our future Engineers Corps Log!