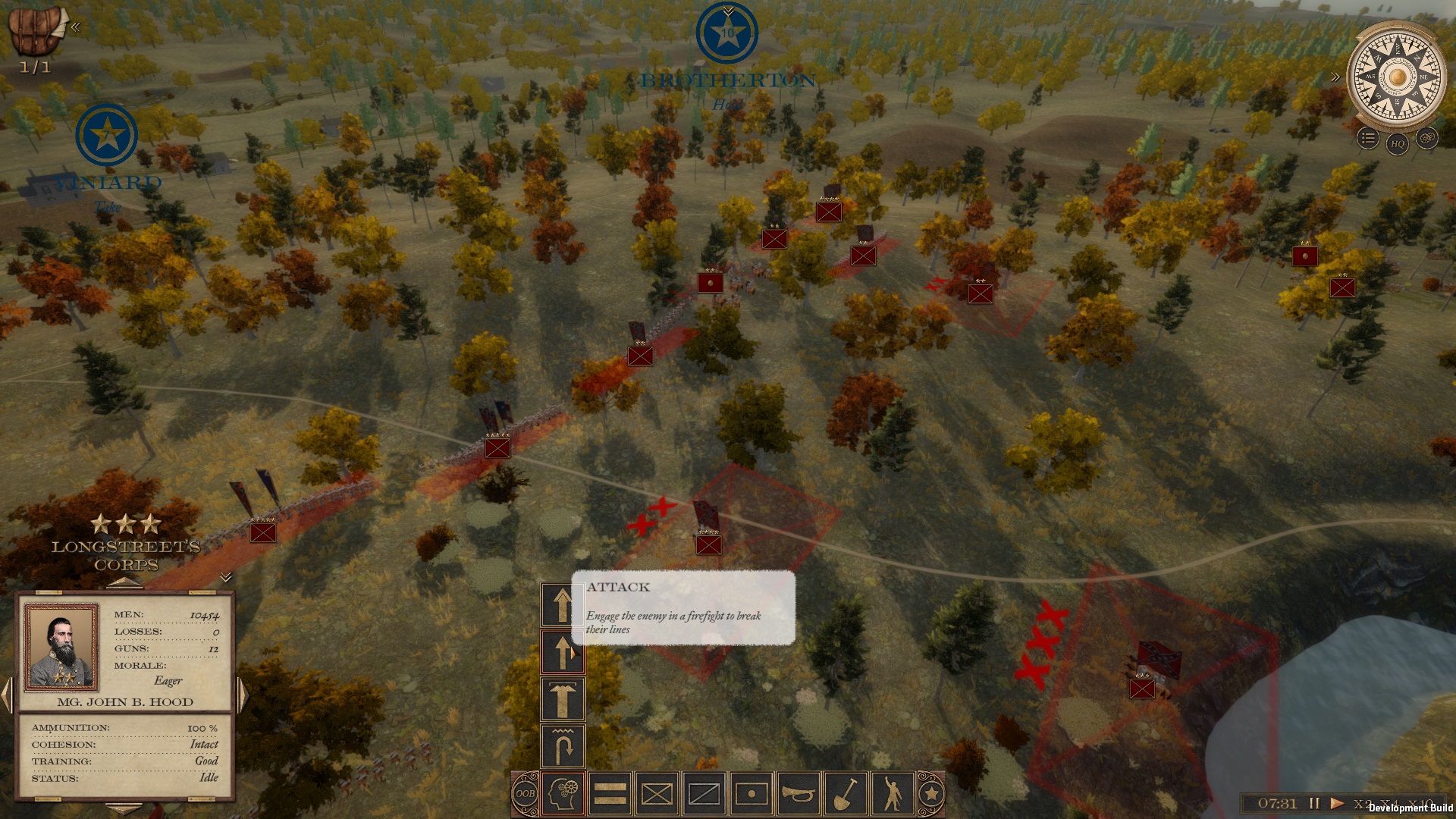 When fighting the battles in Grand Tactician: The Civil War (1861-1865), you will face an enemy ran by a multi-layer AI opponent. In to-day’s Engineer Corps logbook entry we’ll talk a bit about the AI, which you, as the player, can also utilize.

Hint: Click the links in the text to open images &c.

A Few Ways to Create a Line of Battle.

When we started drafting the concept for the battle AI, we had in the background Oliver’s The Seven Years War (1756-1763) and its battle AI. In that title, the battle line for the AI was created by determining player’s army’s flanks, and line center. The AI would then match this line, deploying his troops accordingly. Depending on mission, the AI would try to out-power or out-flank player with its units.

Though it sounds very simple, the end result was quite good and true to period. For example, if player started to turn a flank, the AI would counter by turning his line accordingly. In many battles I played, the end result was the battle lines rotating around each other, just like happened in many historical battles. But when we jump from times of Frederick the Great to American Civil War, we can see a few important development steps in tactics, which required some more thinking in the AI concept.

Armies had grown larger since The Seven Years’ War, which required more robust organization. Corps organization allowed independently moving masses of troops with their own logistical support, so the whole army did no longer need to be together. Napoleon’s maxim “march divided, fight united” and identification of interior and exterior lines, as explained by Jomini, meant the battle lines would seldom be straight, and turning the flanks would be the norm instead of oblique order attacks, like favored by Frederick. With improved communication methods, the large bodies of troops were also easier to maneuver efficiently, which again increased flexibility.

Due to the above facts, we decided, at least partially, to abandon the simple matching of lines mechanism, and went deeper with an AI that would have different levels according to organization and maneuvers.

The Levels of AI.

The top level of Grand Tactician’s battle AI is the army. On this level, the army commander decides the strategy the army will follow, and will give orders to “AI groups”, which are explained later. The Army commander will calculate known facts like the size and combat efficiency of the opposing armies (morale, experience, casualties, &c.), as well as troops arriving later as reinforcements. Depending on his personal attributes, he will decide whether to try to break the enemy line in an assault, try to outmaneuver it in attack, to take up defensive positions, or to withdraw from the field. The commanders also follow how the battle develops, and change the strategy accordingly – though with a delay. As personal and army attributes other than simple number of men is taken into account, it is possible to have a smaller but more aggressive army to take the initiative by attacking, or to force a numerically superior opponent to cede the battle-field by inflicting serious enough casualties to unease the commander-in-chief. Just like happened during the Peninsula Campaign in 1862 between Lee and McClellan.

Under the army level, we have something we call “AI groups”. These are usually corps and division level organizations, or a number of them, that carry out the actual maneuvers. An AI group will maneuver on a “line of operation”, as described at that time, and will fight united as a “line of battle”. To describe this in historical context, one can see how the Battle of Wilderness in 1864 was fought: On May 6th on the Union side you clearly have 3 separate lines of battle, Sedgwick and Warren in the north, Burnside in the middle and Hancock in the south. In Grand Tactician this would be 3 different AI groups.

The AI groups are formed so, that there will be a main unit, a corps for example, around which the rest of the group is built. More units can be added to the line, on right or left, to reserve behind the main unit, or in front or flanks to screen the movement. Additional units will follow the movement of the main unit, and are considered “linked” with it. They will do their best to maintain formation. When fighting on the offensive, the AI group will try to turn non-anchored flanks of the opposing line, or if impossible, to break the line by assaulting. On the defensive, flanking maneuvers are met with refusing the threatened flank, curving and reinforcing the line. When AI groups arriving on the battle-field from opposing directions meet, they are combined into a larger body, and so on.

The larger unit(s) within an AI group will be given a stance, or tactic, according to strategy, situation and position in the formation. The stance, which player can also give to his commanders in a battle, dictates how the commanders will use their single units, the brigades, artillery, &c. The stance can be to screen, to defend, attack or assault, and the used formation, tactics and maneuvers change accordingly.

The Brigades Did the Fighting.

The actual fighting is carried out by what we call the “micro-AI”, or the single unit level AI. This AI carries out orders that they receive within an AI group, and it also reacts to threats independently. This AI is the brigade commanders and such, who lead their men into thick of the battle, with no clear image of the bigger picture. The Micro-AI is also coupled with path-finding, navigating the battle-field to where he is ordered to. Micro-AI actions include, for example, stopping to fight an enemy, changing formation, advancing or falling back under fire, charging a weak opponent or maybe taking cover behind a stone wall or laying down to avoid artillery fire. The division and corps commanders and their staff also are controlled by this AI. Player will not be able to micromanage the movements of the commanders himself, as they will find their own place in the formation according to situation and threats.

The player can place larger units (divisions, corps) under AI control, using the orders to use certain tactics, or stances. This will allow the player to focus on something else, while the AI acts on its own, according to stance and movement orders from the player. There is also the control to allow initiative, which, when not coupled with a stance, will advice the commander in question to interrupt his movement, reform and report, if he runs into enemies. Without this initiative, his troops would carry out the initial orders, reacting to threats only if they directly affect single brigades &c. With a stance, after the initial reforming and reporting due to enemy contact, the commander will start carrying out your orders…

…but not in every case. The different commanders in Grand Tactician have different personalities, and like in reality, not all personalities work well together. Famous and experienced commanders have the highest probability for friction with completely different kinds of personalities. The friction could end up in open feuds, and this will complicate the line of command. The end result could be disagreeing with orders, delaying carrying out orders, or even acting on one’s own. This makes officer management even more important during the campaign, but also adds some extra realism: The Civil War was full of personal feuds that had an impact on the battle-field!