Full Steam Ahead - Navies in Campaign. 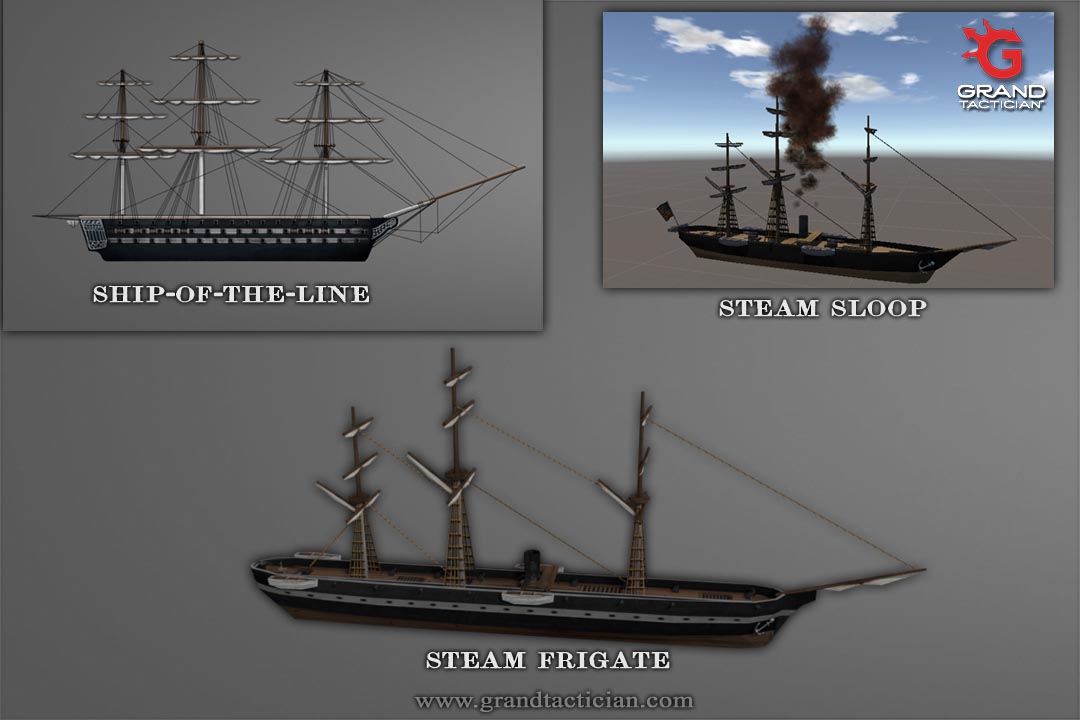 When planning your strategy in Grand Tactician: The Civil War (1861-1865) grand campaign, armies are not your only military tools. Fleets, from the brown-water navy to blockading squadrons to transport fleets, will play an important role during the war. The Civil War saw great changes in naval technology and warfare, from sailing ships to mainly steam-powered warships, from wooden design to ironclads. Will Scott’s Great Snake be able to strangle the South, or will you see rebel ironclads crawl up the Potomac to bombard the Union capital?

In Grand Tactician, you can utilize the naval power of your nation by building ships and assembling them into fleets. There are actually four kinds of fleets in the game:
- Navy Fleets, with large ocean going warships
- Brown-Water Navy, or the River Fleets, with gunboats and paddle-steamers
- Transport Fleets, that carry troops
- Trading Fleets, that can trade with foreign powers as well

Navy and river fleets are assembled under a navy officer, and will be moved on the campaign map just like armies. The river fleets can operate along major water-ways like Mississippi -river, but cannot move to open sea. Navy fleets navigate the salt-waters, but if small enough ships, especially double-enders are available, they too can go up a major river. The fleets can engage other fleets, bombard armies and fortifications, and take part in sieges. This allows joint operations, like those that took place in the West or maybe a naval maneuver like Peninsula campaign. Navy fleets can also be used to blockade enemy ports.

Trading fleets operate from the ports, number of ships depending on the size of the ports. This is all automated, so player does not have to worry about it. Unless blockaded by the enemy, of course! As fleets blockade a port to intercept trade, the port trading capacity will go down, and prices up. This will hit the economy – a major target for either side. To counter this, player can try to attack the blockading fleets, or try to run the blockade. If player purchases blockade runners, more of the trade gets past the blockading fleet, but number of the blockade runners will be captured over time.

Regarding blockades, it’s not only an economy issue. It’s also political. In Europe, there’s big demand for cotton in the textile mills. But also the European superpowers use blockading as a strategy, and to keep this weapon in use, they also need to consider blockades, especially very strong ones, legit, which could prevent them from taking action, if otherwise seen appropriate?

From Timber to Iron Plating.

When the war started, the U.S. Navy was not very large, as was not the regular army. Technology in ship design had taken big leaps, and the wooden colossi of the high seas, ships-of-the-line, were already being rendered all but useless, in the face of steam powered ship that didn’t need the wind to maneuver, and the iron plating that could render a thundering broadside into base of percussion at best. But while these monsters are available, the player could try to utilize them to more than receiving new recruits in the ports?

In the game we have a broad range of ship types available. From the humble schooners to sloops and frigates, and of course the legendary paddle-steamers moving up and down the rivers. Over time, with the needed technology and industry in place, the ships can be upgraded, and new ones built, into steamers and various kinds of ironclads, from the case-mate rams to turreted Monitors.

While building the ships requires a level of industrialization and material, keeping the fleets going will also require something to burn: from coal to foodstuffs and ammunition. The fleets do not have infinite days at sea, but require ports to replenish and repair. In case the industrial potential is not there, maybe a bale of dollars could procure a state-of-the-art warship from the European friends? Or maybe someone is crazy enough to line a ship with cotton-bales for even some additional protection? And how about a ship that moves under water unseen?

In Grand Tactician, naval combat is resolved on the campaign map. In the battles the number, type and size of ships and guns is taken into account, as is the armor plating and close-up ramming. In the end, ships can change ownership multiple times during the campaign, and sometimes it’s better to scuttle a valuable ship than let it fall into enemy hands.

And then there’s chance. A lucky hit in the steam engine could end in a catastrophe, and while armor plating could withstand a seemingly endless amount of punishment, a lucky shot could disable a turret in a Monitor, rendering it next to useless in the battle.

And even if you as the north could dominate the southern fleets, if the big players from Europe feel the urge to intervene, they would most likely bring up the big guns with them!