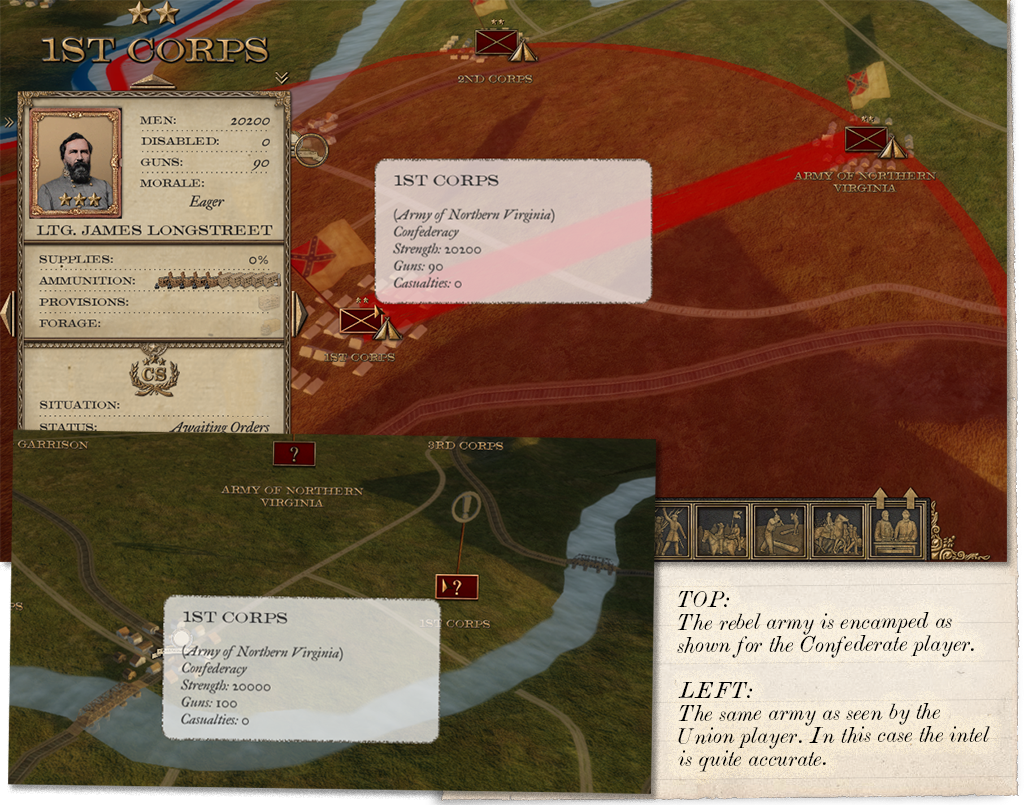 The Grand Tactician is an operational level strategy game. This means the main thing the player is supposed to do, is to muster, supply and command his/her armies and fleets in order to meet the strategic goals of the nation. While we have discussed and shown in videos how commanding armies functions in battles, this time let’s take a quick look at what’s in store on the campaign side.

Like on battles, we use order delays on campaign as well. Here, too, the delays depend on initiative of commanders and distance between units within an army. But when commanding the armies themselves, you are able to utilize telegraph infrastructure. Telegraph stations within range of one another are considered in contact, which allows a chain from the capital city to the armies. When on campaign, the player can use the army to construct new telegraph stations. But these stations can be captured or burned down by the enemy, which will mean the loss of communications and much slower delivery of orders. Other military infrastructure the player’s armies can erect in the game are supply depots and forts. But we’ll cover those later!

Like in battles, the movement order can be given as timed orders. This will better allow coordinating movements of multiple corps within an army, for example, to make sure they can support one another during the movement too. You can also direct the army to use, or not to use transportation via railroads, rivers, or sea. Depending on the route, and available transportation equipment, the army will then take the quickest route and transportation combination to ordered destination. This will allow amphibious movement and river expeditions. If a forced march is ordered, the unit will move faster, but rate of attrition will go up, and condition of men down, while also readiness suffers. 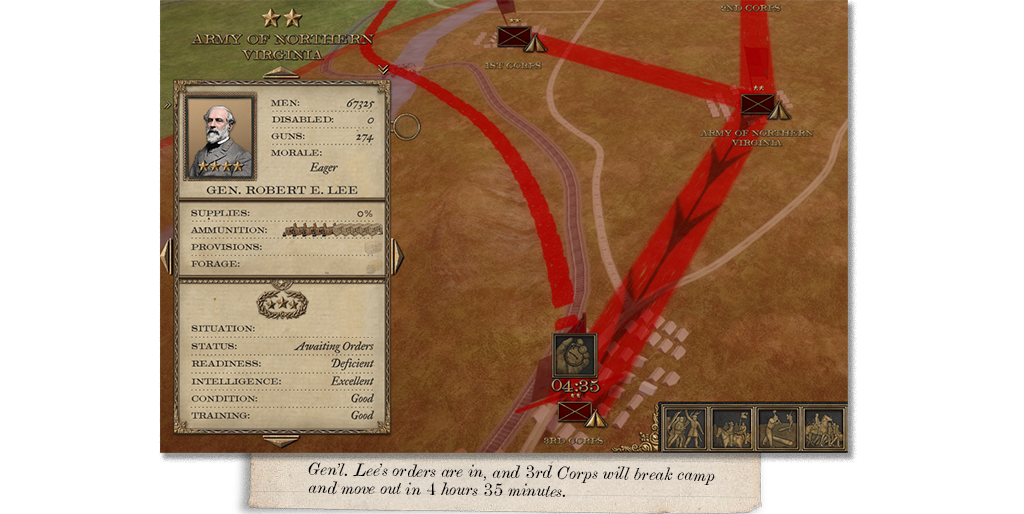 Armies can be ordered to take offensive or defensive stance. When offensive, the units will engage enemy units, siege enemy forts and reinforce battles that take place within their range, or the range of their parent army, if they are within range of the army commander. Offensive units will encamp when movement is finished, but will not start to dig in to allow quick reaction to further movement orders. When encamped, units will be resupplied, and the men can rest. If encamped during the winter, the army will go to winter quarters, which will protect them from the cold, but will increase order delays. Defensive units will not engage enemies within range, but will instead stop and dig in. If two opposing defensive units meet, they will both entrench and the end result could be Petersburg kind of trench warfare stalemate situation. Offensive and defensive orders will allow you to block terrain and enemy movements, create reserves, and so on, with ease.

Cavalry during the Civil War was a versatile branch of arms, with the effects taking place also outside field battles. For this reason player can order the way he wants his cavalry to act within his armies. During the early war, guarding was the most usual task. The cavalry would patrol the close proximity of the armies, secure lines of communications and be deployed as a screen behind the main line to stop stragglers and deserters. In this role the cavalry units will not fight in the battles, but on campaign game-play, the readiness and security of the army is improved, and desertion lower. When raiding, the cavalry will attack enemy infrastructure, skirmish with enemy units, and forage the countryside. This allows burning down the Shenandoah Valley, and similar operations, which will also hurt the support of the civilian population. The third special order for cavalry is to scout. Scouting cavalry will improve readiness and intelligence gathering of the army immensely, will skirmish with enemies within range, but will not appear in battles, except in case of a cavalry corps. If on a scouting mission, a cavalry corps will join field battles, but could arrive a bit late due to the need to concentrate beforehand. Think Stuart at Gettysburg. With no special orders, the cavalry will fight in field battles with the rest of the army.

Any Signs of the Enemy, Sir?

While the above orders allow flexibility in your use of the armies and planning of operations, one problem you have is the information about your enemy. Many times during the Civil War, the information about enemy movements was quite vague. While it probably was known if an enemy army was on the move, the exact location and status was not. And this made operations tricky.

To simulate this effect, we have created a different kind of fog-of-war mechanic for our campaign map – we call it the intelligence map. In battles, you basically see the enemy units when your units spot them in the terrain. On the campaign map the same is true, but information about unspotted enemies will also be available. This information is gathered via spies, scouts, local loyal population and from the local news – even those of the enemy. The less sources of information you have from an area, the less accurate the intelligence from there will be.

We simulate this intelligence by showing approximate information about the enemy, hidden in the fog-of-war: for example you may learn that Jackson’s Corps was sighted near a town three days ago. Most likely the corps has since then moved on… but where to? When intelligence about the same unit pops up from elsewhere, you are able to track the approximate movement of the enemy. But there are a couple of twists there: depending on the cunning of the commander in question, the intel delay is further increased. Also the number of men within the army will be just an estimate. And depending on your commanders, they may interpret and assess the received intelligence with errors. So, with this mechanic, it will be possible that the 500,000 rebels reported by McClellan being dug in around Richmond could actually be quite a lot less in numbers, and maybe attacking the right flank as we speak!

To help the player to understand what kind of intelligence to expect and from where, we’ve added an information layer on the campaign map. With this layer we can easily visualize on the map the intelligence coverage. With the same system we are able to show a lot of other information later on, like the dynamic front lines (depending on positions of armies, ownership of towns, etc.), population density, support, and so on.