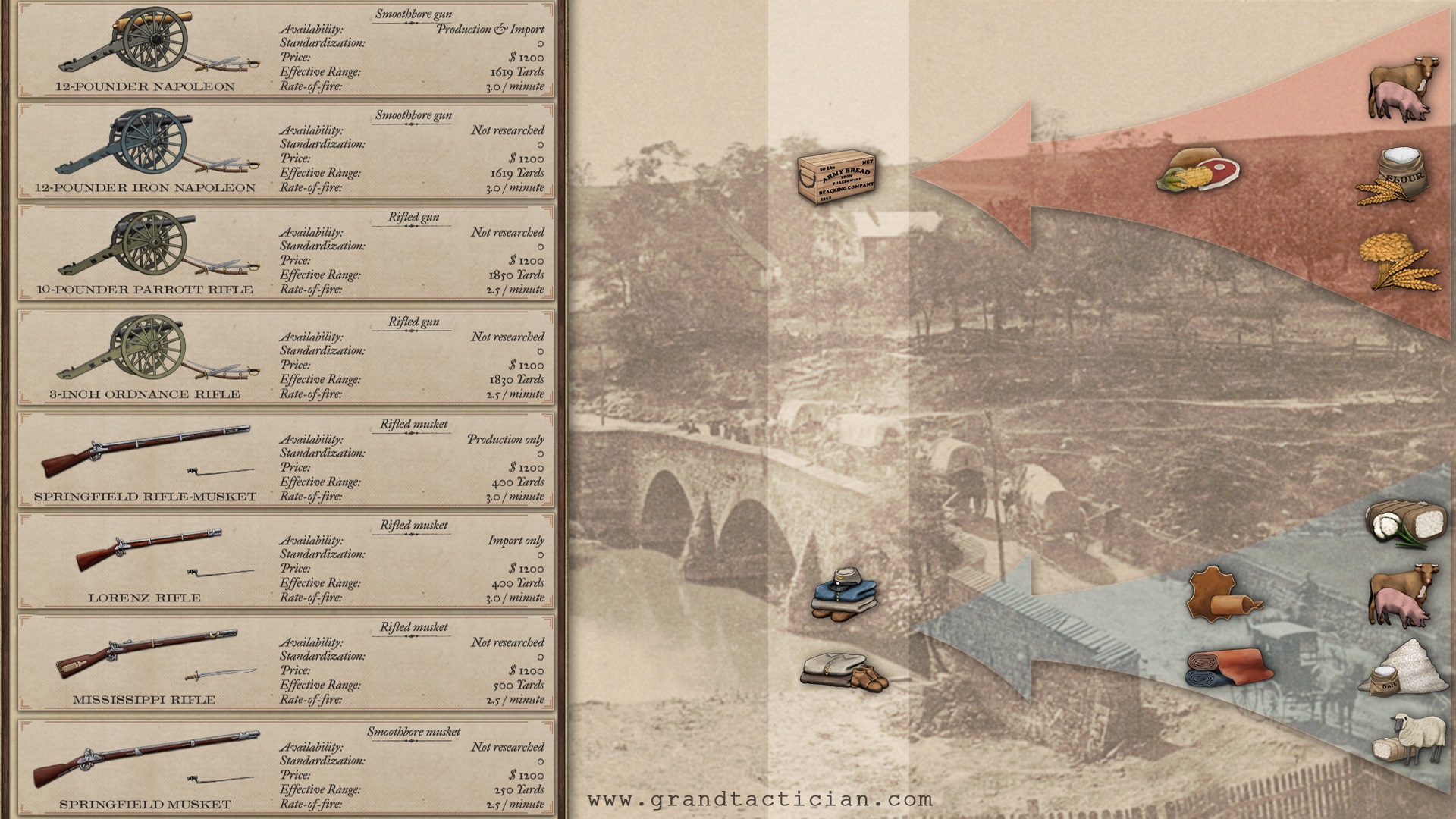 Today we take a look at the economy of Grand Tactician: The Civil War (1861-1865). Although there were many hints from the community to not overdo the economic part of the game we thought that this was an important factor of this war. Therefore we are currently adding all the nice features to the game, but taking care of not forcing the player to micromanage too much.

Most of the economy in Grand Tactician is run by the AI, for example companies are established automatically near towns depending on the available workforce, connected infrastructure, corporate tax and the local availability of pre-goods and demand for the finished product. These companies produce more than 30 goods which are circulating through the trade system, all produced to feed and arm your economy, population, military units and fleets. Supply depots are building up stocks in weapons, ammunition and provisions to supply nearby armies. Although supply depots can be captured or constructed by the player, you will always need to take care about your supply lines as trade and supply routes can be cut off to reduce the condition and morale of the affected units. If a unit operates far from its supply base the supply trains take longer to reach it, resulting in lower supply rates. If you overstretch your supply lines you may use means like Sherman on his march through Georgia in 1864: raiding and foraging. But who knows the outcome of such operations? The economy in the affected region would suffer, people would starve and maybe more men are rushing into the enemy ranks.

Land of the Free, but Not for All.

A very controversial and sensitive topic for us was the representation of slavery in our game. As slavery was the main cause of the war we decided not to abandon it to play safe, sanitizing the evils of men – as that would desecrate the integrity of the historical story we’re attempting to portray. From an economic perspective the use of slaves on the southern farms led to a plunge in production costs of agricultural products, thus leading to a huge competitive advantage. A southern farmer could have returns of 20% on his investment, much more than the average return on industrial investments. In reality the northern states had nearly 10 times the industrial output than the southern states while 84% of the southern economy was related to agriculture – especially “King Cotton”. These effects are accurately simulated in our game. But we will also add a pre-war campaign scenario, which allows the player to push the economic development into another direction by using certain political means. So maybe in 1861 the South has industrial dominance and blocks northern harbors while the North needs to buy blockade runners from Britain?

Looking back into history, the US pre-war economy was closely linked to Europe. Especially Great Britain and France were depending on “colonial goods” like cotton and tobacco. The player will need to negotiate trade treaties and secure his export routes, while there will also be option to import products from Europe, weapons or modern battleships for example. The latter was mostly an option used by the Confederacy as money was better available than production sites. Although we allow European nations to intervene in the war, Britain or France will weight what to gain and what to loose: so blocking southern harbors to push up cotton prices may not force Britain to react if the country is more depending on Union wheat deliveries, which was an important topic as well, due to the higher demand since the Crimean War. But maybe the Confederate player increases the pain further by adopting an export ban on cotton? As the Old World superpowers used blockade as a legal means for their own warfare, a blockade tight enough may prevent intervention as well.

A further aspect of the war was the change of the means of transports. Canals and later railroads not only affected troop movements but also trade routes. The railroad network can be expanded to further strengthen infrastructure. This will be an important issue especially in pre-war scenarios. Trade flows much faster along major rivers like Mississippi, the many canals leading west, and railroads, making them priority targets for military operations. Especially raiding tactics could disturb or even cut trade and supply routes, resulting in lower production, more expensive supplies and less corporate development. This is directly connected to the morale of the public, which is the key factor that allows waging the war to a decisive conclusion.

As you can see the economy works very detailed in the background, but grand tacticians don’t need to be afraid: the player will only need to take a few major decisions to influence the economic state of his nation, either by using certain policies or determining the economic framework on a macro scale. Also the economic system is not as vulnerable as in my previous game The Seven Years War (1756-1763), where each industry building could produce only one type of goods. Now, a single iron works can produce rifles, artillery pieces and ammunition depending on demand and expertise. So there would not be a total lack needed goods, but as the production suffers, prices will skyrocket and this will hurt the whole nation.

Your Most Obedient Servant,