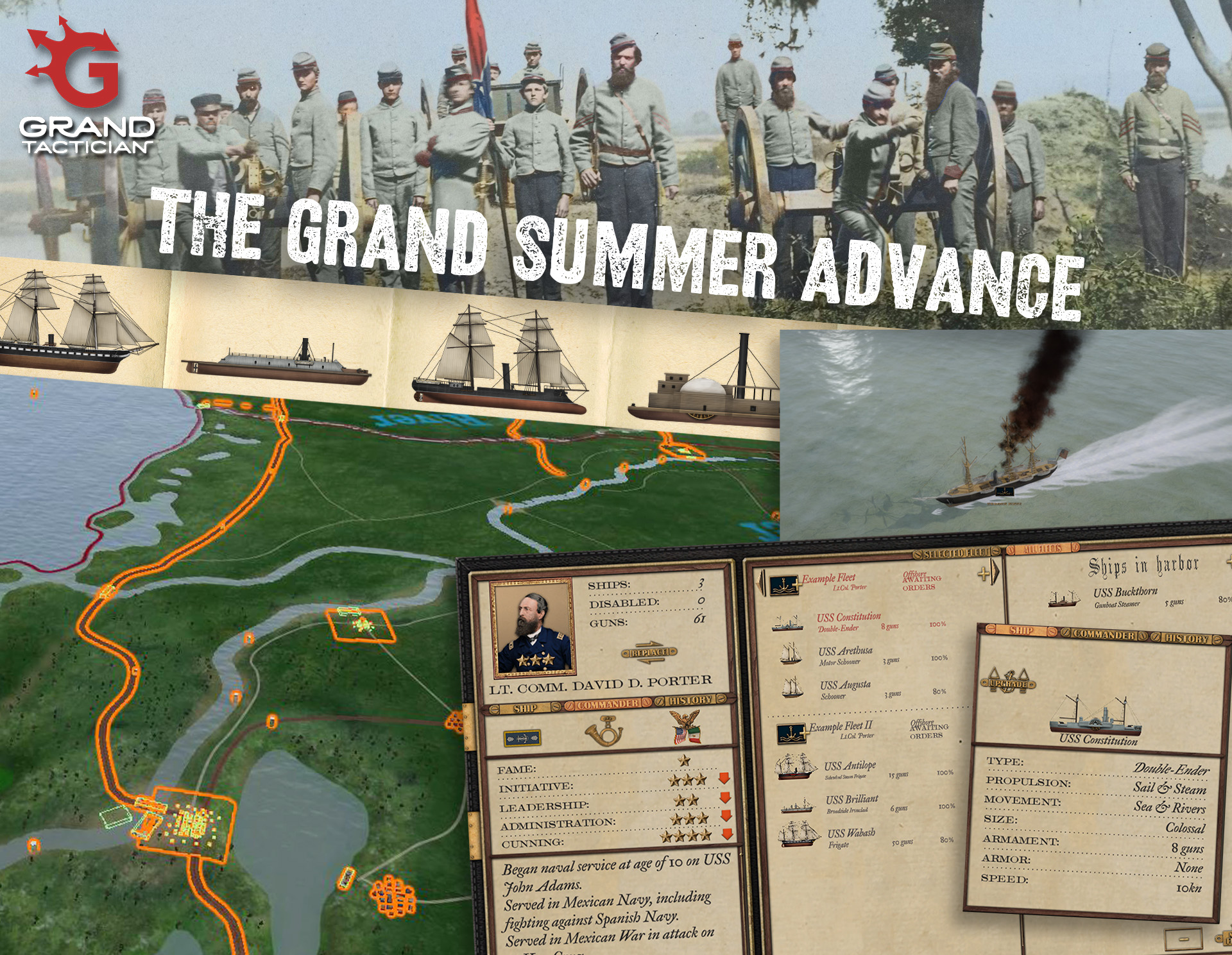 While news have been scarce during the summer, the Grand Tactician -team has been pushing full steam ahead on multiple fronts.

Fleets are Being Constructed.

Construction of ships and creating fleets under naval officers is possible. Depending on capacity in your ports, you can build ship types depending on available technology and resources. With certain policies, you could also import new ship types from Europe. Assembling a fleet is as easy as managing the armies: simply drag and drop ships from ports (“pool”) to the fleets. You can even do this if the ships are not yet finished. They will join the fleet once ready. Moving single ships between ports and fleets has a delay depending on travel speed and distance to cover.

There are 26 different ship types available to build, from simple gunboat steamers (mainly civilian ships with some armament) to ocean going ironclads. Each one has different attributes, for example the number of days they can spend at sea. As these numbers will be different within a fleet, to reduce micromanagement, we have added automatic ship rotation within fleets. This means the fleet itself will always be where you ordered it to be, for example blockading enemy ports or patrolling, but single ships will autonomously return to port for supplies, repairs, and upgrades, then return to the fleet. If you add a monitor class ironclad to a fleet with sailing sloops-of-war, it means the sloops can stay out a lot longer, and the monitor will need to resupply about every 20 days…

Work on an epic campaign map has been ongoing from producing the tools to populating the map with cities, towns, roads, railroads, and so on. This includes a ton of historical research, and sites like bridgehunter.com have become real useful in finding out which bridges and ferries have existed at what time, and when they were built. As we allow expanding the railroad network during the game, we will also have the correct railroads ready and available depending on campaign starting date: years before the war the rail network started expanding rapidly, and work continued throughout the war.

With an infrastructure network concept implemented, the map, including economy and logistics, will interact with the armies. Armies will be able to block trade and supply flows through towns, bridges, mountain passes, rivers, canals, etc. This allows real nice maneuvering to cut enemy supply lines by taking choke-points or raiding railroads. Taking hold of Mississippi river alone, for example, will be possible without the need to control whole states in south.

This will take some time, though, as the map is huge. Once ready, the map looks will be improved by the artists, and this will include also the beautiful paper map as seen in previous blogs.

By adding customizable attributes to armies and fleets player can make his experienced units more effective. For example an army could become more effective in intelligence gathering in multiple ways. Using a balloon is slow, but with experience, the aeronauts could maybe direct artillery fire, making the army slightly more effective in sieges? Or an intelligence bureau would improve accuracy of information about unseen enemy movements and the information delay? Or maybe organize hand picked cavalry scouts to work behind enemy lines, like Wade Hampton’s iron scouts? The amount of attributes for armies will be limited in numbers, so you better choose wisely. And yes, here too we aim for historical accuracy instead of gamey superpowers.

We also added a little feature called “history” for commanders and units. This means the game will track what your armies and officers are doing during the game – listing dates of promotions, battles fought, and such. Additional information about, for example, pre-campaign history can be added manually. This allows the player to better keep track on who’s who in his military.

Armies and fleets already roam the campaign map, and the campaign-to-battle-to-campaign -link is established. Though a lot of work is still ahead on this side, including combat models for sieges, naval battle and so on, it’s encouraging to see the main ideas behind the game come to life.

As you can see, a lot has happened in Grand Tactician during the summer. We also are finalizing the original soundtrack recordings, and starting the work on the campaign videos, using LionHeart FilmWorks’ beautiful footage, with a professional TV producer. All this will allow better immersion into the Civil War world of Grand Tactician!

Have a great summer! Most Respy,