Grand Tactician: The Civil War (1861-1865) was released on Sep 24, 2021, after a year in Early Access. Even before the full release, we had a post-release road-map, describing the development steps we were committed to take to further improve the game, for free. These were ideas and concepts that were not part of the original game design, but what we nevertheless wanted to add to our game. Let’s take a look at the progress, and the next steps.

Currently, we have released six (6) major patches to the game, each one bringing new features, in addition to the obvious bug fixes. All of the added topics in these patches were not part of the post-release road-map, but for example highly requested features from the players:

*Patch 1.01 was mainly for bug fixing, but it also added campaign and battle tutorials and commander promotions.
*Patch 1.02 added a battle information panel for autoresolved battles, rebalanced the battles, and included a list of improvements for the battle AI.
*Patch 1.03, the first major patch, changed the game’s 2D unit sprites into 3D models, with other visual improvements. At the same time the game’s saving & loading system was updated to allow management of the whole save library, instead of scenario specific management, and two new historical battles (Stones River, Champion Hill) were added.
*Patch 1.04 introduced a long list of AI improvements, main focus being on the campaign AI, including naval invasions.
*Patch 1.05 was another mainly AI focused patch, but also introduced a number of new military management options, like prioritizing reinforcements and unit replenishment or detaching a new independent corps from an existing army.
*Patch 1.06, the biggest patch so far, overhauled the game’s economy completely, from the way how subsidies work, to introducing new projects-system, weapon production system, and new building options.
*During the patching process, a few new random maps have been added, and further ones will be added along the way.

Like you can see in the map image above, the development did not follow the operational plan step by step. After the release, we quickly re-prioritized the steps according to players’ requests and feedback. Now, here are how the next development steps look like, and how the post-release road-map will be finalized: 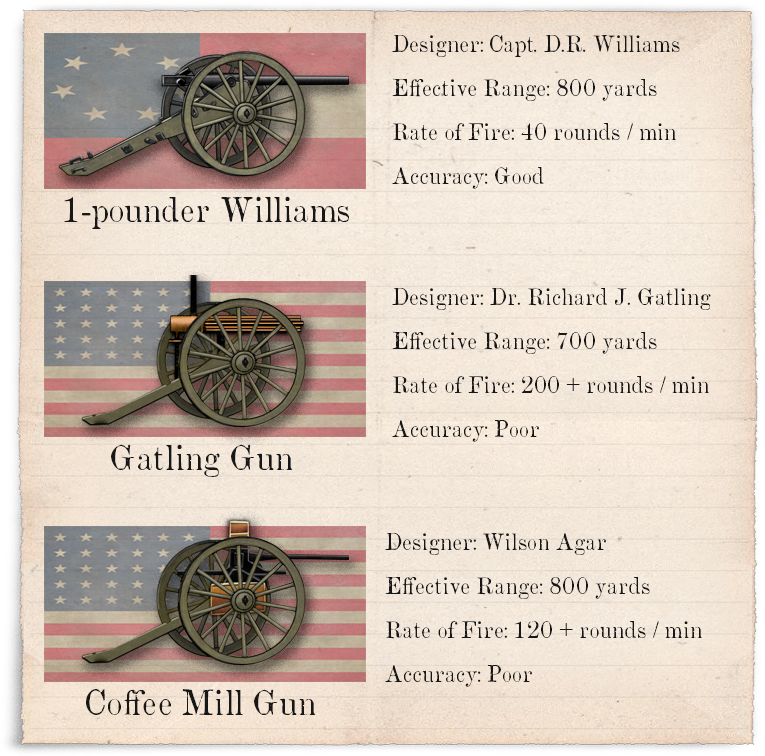 While version 1.06 added the projects-feature, reworked weapon production and added four (4) new rare weapon types, in this patch we will also add three more weapons, finalizing the rare weapons -step. The new weapons are the Gatling gun, the Coffee Mill (or Agar) gun for the Union, and the 1-pounder Williams gun for the CSA. These new, rapid-fire weapons come with their own projects. The Union “machineguns” will not tip the balance on the battlefields, even if they can be quite useful in certain situations. The Williams gun is small and cheap to produce, but not that lethal. There is a reason the said weapon types did not see wider use during the war.

A few more projects will also be added, focusing on the early war organization reforms. Both artillery and cavalry units will be available only in smaller unit size, until organization reforms, that will introduce the more effective artillery battalions and cavalry brigades. Further cavalry reform will unlock the ability to recruit horse-artillery. The organization reform -project, introducing corps organization, will now also make logistics more efficient in general, reducing the number of needed military supplies in the newly organized armies.

Version 1.07 will also include a modding tool (Excel format), that allows editing and creating some of the game’s data files.

One of the highly requested features has been the ability create a custom commander in the game. Version 1.08 will introduce tools to do just that. The player may create a custom (army) commander, that is added to the list of commanders in the game. After that, the commander is handled just like any other officer. Will the avatar die in the first battle, leading a brigade in a desperate charge? Or will the avatar one day become the commanding general of the armies?

While finalizing the above features, we are also looking forward to future content in the game. But more about this later!