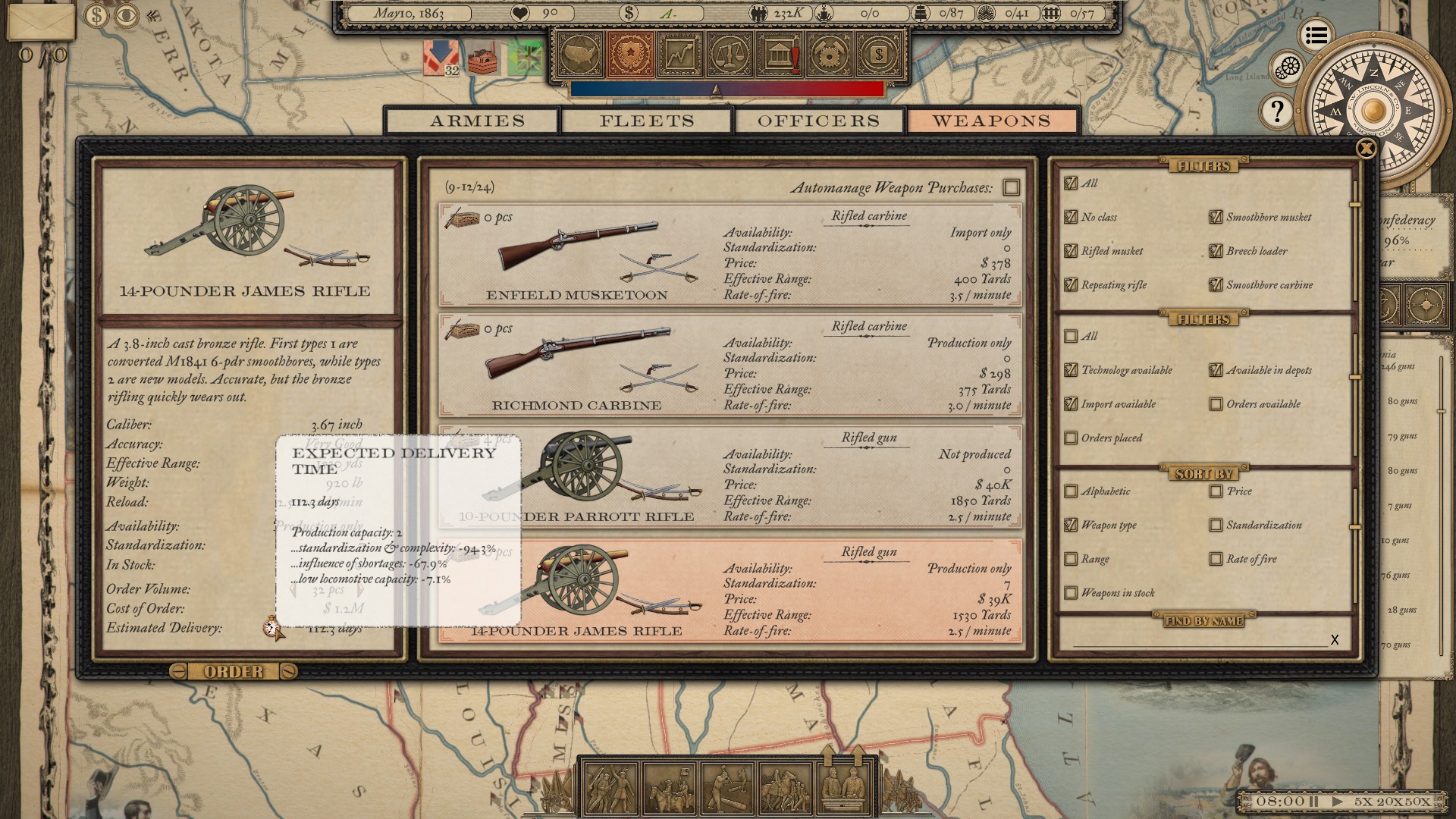 Weapon production and procurement system has seen some changes during the development of Grand Tactician: The Civil War (1861-1865), most recently in the 1.08 patch. Let’s take a quick look at how the system works now, vs. previously.

The ability to equip and re-equip units with different weapon types has been one of the unit customization features in the game since the beginning. Originally, since the game’s Early Access release in fall of 2020, the weapon production system was quite heavily abstracted, which many players found unsatisfying, as they had no real direct control over the production.

In short, it used to work like this:
- Industrialization & Diplomacy policies made certain weapon types available, with the better weapon types requiring higher level policy to “unlock”.
- Once the weapon was available, production/import started automatically. Depending on fixed “standardization years” and “equipment modifiers”, the weapons were added to player’s “pool”.
- Standardization year: each weapon had a year, from where onward the weapon type was available. During approximately 2 years the standardization would increase following a curve. Example: weapon standardization year is 1861. In 1861, more weapons of this type became available very slowly, and in around 1863 the production would reach the highest level, as per equipment modifier.
- Equipment modifier: using this value, the different weapon types were balanced according to historical data. Example: Springfield Rifle-Musket, with historical production numbers of more than 1 million units, had a very high modifier, meaning much faster production than say Richmond Rifle, that had historical production of just a bit over 30,000 units.
- Weapons were not tracked as individual pieces, but rather per units to equip.
- Weapon costs were realized at the moment units were equipped, and the costs were depending on number of Weapons & Artillery goods types in markets, which tied the system to economy.
- If a weapon type was commonly used by units, it’s production would speed up a bit.

As said, the system was quite abstract, and limited player’s options. For example, if the player would have wanted to focus the industry to produce repeating rifles, this was not possible, as these weapon types became available very slowly. For this reason in patch 1.06, which focused on economy in general, we changed the system. But there were some bugs, plus a few remnants from the old system, so we wanted to revamp it further in version 1.08 of the game. 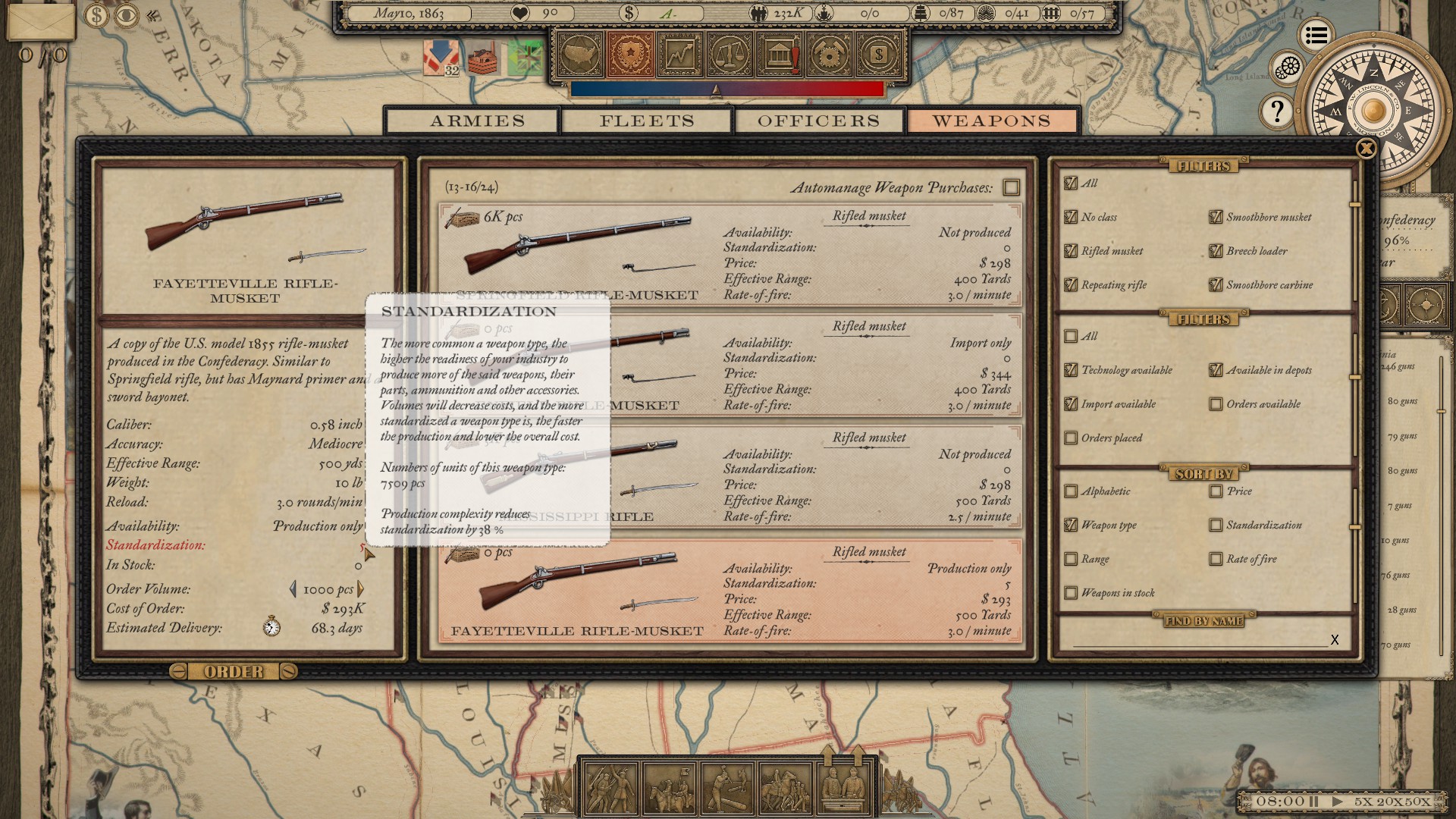 Fayetteville Rifle has low standardization, as only 7509 examples of this weapon type have been produced so far.

The new system works quite differently if compared to the old one:
- New weapon types are made available via Projects, instead of policies. This adds the possibility to more directly influence which weapon to procure. If the player wants to focus on repeating rifles early on, it is possible, but it requires much higher subsidies than more simple weapon types.
- Using the new Weapons -panel, player can place orders for available weapon types. These can be either produced domestically, or imported from Europe.
- Weapons are tracked by actual number of pieces per weapon type. This also allows tracking of weapons captured in battles, including them in the stock.
- Each weapon is ranked per Production Complexity. The more simple the weapon, the cheaper and faster it is to produce.
- Equipment Factor is used only to balance production times between weapon types, or availability of imported weapons in Europe. For example, it’s used to make a difference between 10-, 20-, and 30-pounder Parrott Rifles, making the larger ones a bit slower to produce, or making sure more commonly available Enfields are faster to import than, say, Dreyses (which historically were not imported).
- Standardization, which affects only domestic production, plays a big role. This value represents the readiness of the nation’s arms industry to produce said weapon type, which in turn depends on the number of weapons of said type in use. If a weapon type is common, it means weapon industry has the required machinery ready to produce further pieces, and also has the means to quickly produce required ammunition and other accessories. When standardization is low, the industry needs to set up the required infrastructure and machinery…
- …which means weapons with high standardization are much quicker and cheaper to produce.
- Weapon costs are realized when an order is placed. The player can place one order per weapon type at a time. Once the weapons are delivered, they can be used to equip units. At this point the costs will cover the required logistics.
- Shortages of needed materials will make production slower and more expensive.
- Weapon imports are affected by blockades. If blockade efficiency is high, less goods get through, meaning orders will take much longer time to be delivered.
- In the Weapons -panel, effects of these mechanics are explained in the offered tooltips. 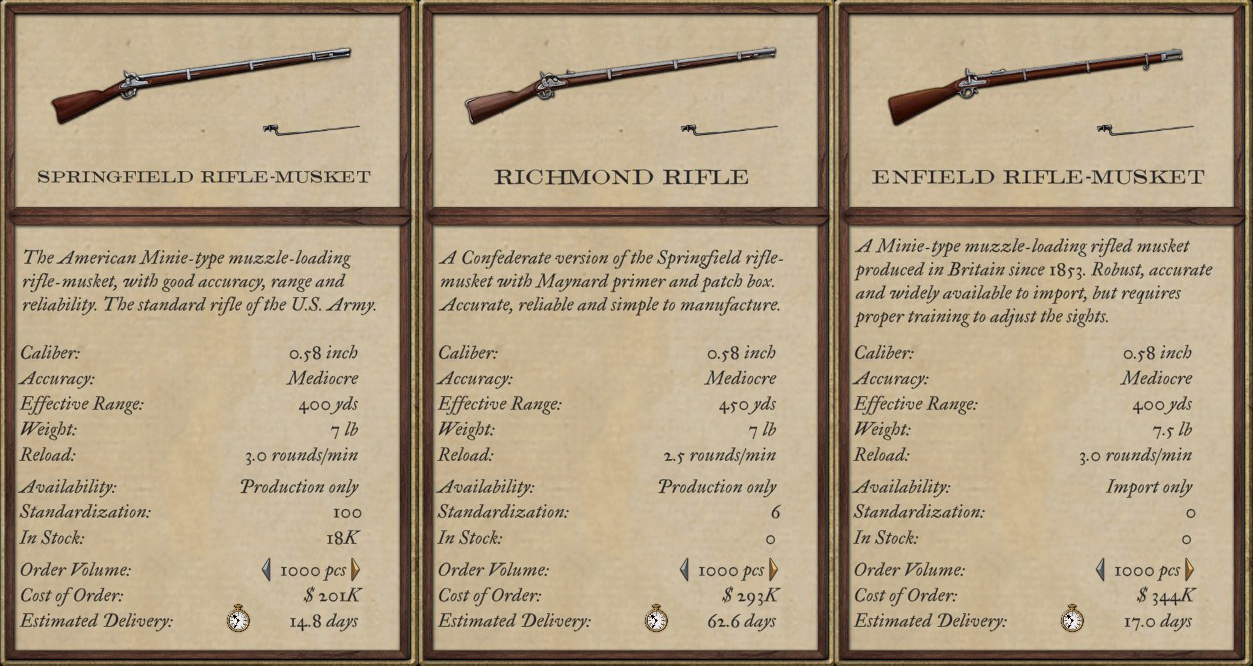 With this new system, weapon production and import (= procurement by the government) are more controllable by the player, and also better balanced. If the player wants to get a lot of weapons quickly, importing is a better option, as long as trade routes are open, but the costs are higher due to the required logistics. If player wants to domestically produce weapons, it’s not possible to start mass production right away, as the industry is not ready immediately. It’s better to place smaller orders first, to increase standardization – later production will be much faster and cheaper than importing, but it takes some time. It also means it’s possible to balance between fast mass production of simple weapon types, such as muzzle-loading rifle-muskets, or more complex types like repeating rifles. And the link to economy is also more apparent: if production facilities suffer shortages on materials, or trade routes are not open, weapon procurement will be directly affected, in the short term as well as in the long term.

I hope this short study explains how weapon production works in the 1.08 version of the game!