With patch 1.06, Grand Tactician’s economy will see a big overhaul, not only increasing its importance, but also allowing player further control over it.

From the beginning, Grand Tactician had an elaborate economic system built into it. When designing the game, we wanted to minimize micromanagement required from the player, while also having the economy play its role in our model of the Civil War. While this did work quite well, we were not completely happy with the end result, as quite a lot was abstracted a bit too far, and the effects of the economy were quite difficult to observe. For these reasons we decided to redesign parts of the economy. 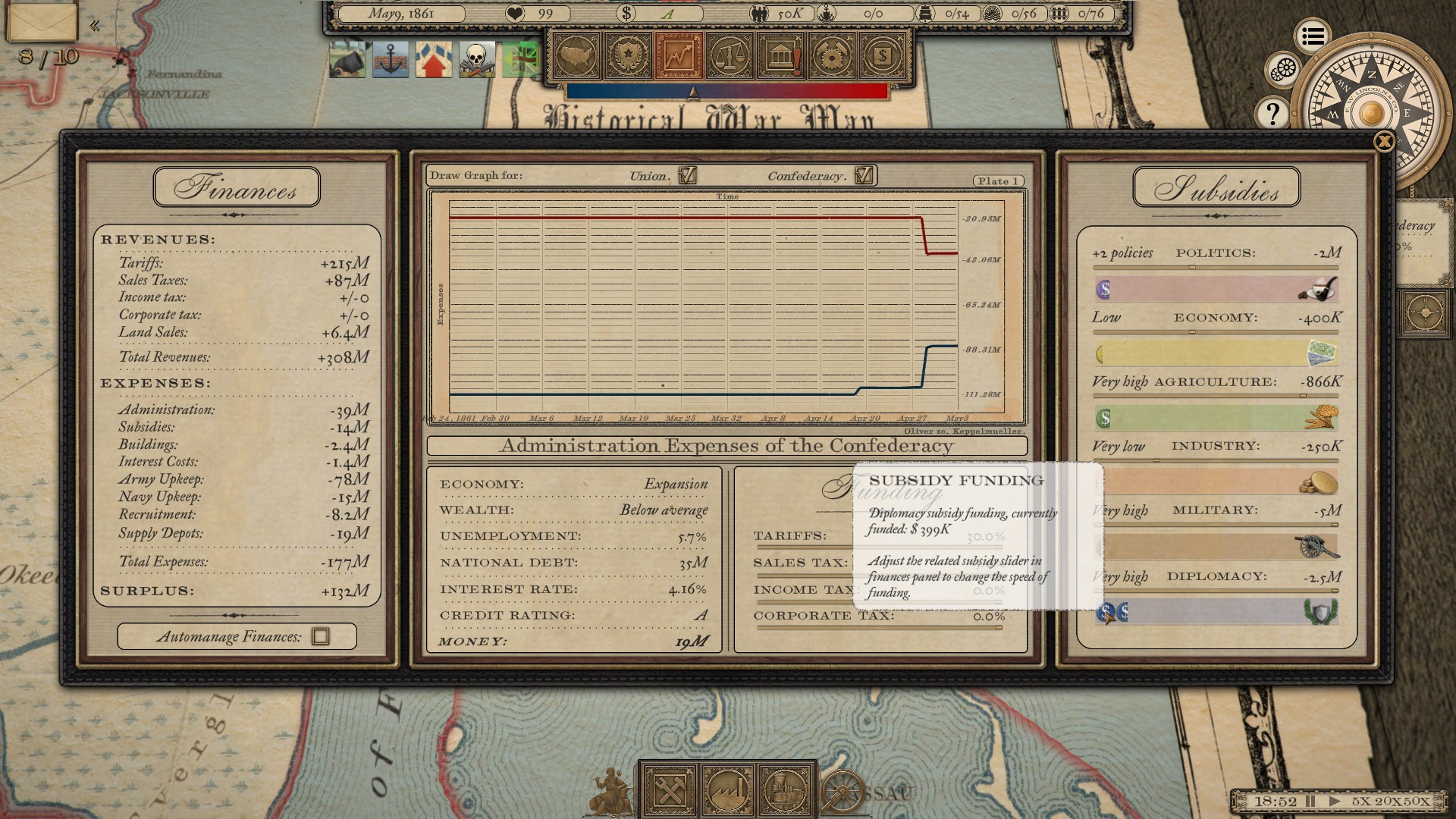 The first noticeable change is in the Finances-panel, and how subsidies work. In the above image, you can see that the subsidy controls have received some improvements. There are now six (6) subsidy types. Politics subsidy type is the only one not connected directly to policies, while the other types are. Enacting Industrialization policies, for example, will unlock further available industry subsidies per annum. Small amount of subsidies are now available even without enacted policies.

Earlier, pre 1.06, subsidies included direct effects. While it worked in principle just fine, it remained rather invisible for the player. We wanted to make the subsidies and the effects easier to see and understand. So, the paid subsidies are now shown under each type as coins of different color. These indicate how much government money has been invested. This money can then be spent by the player. 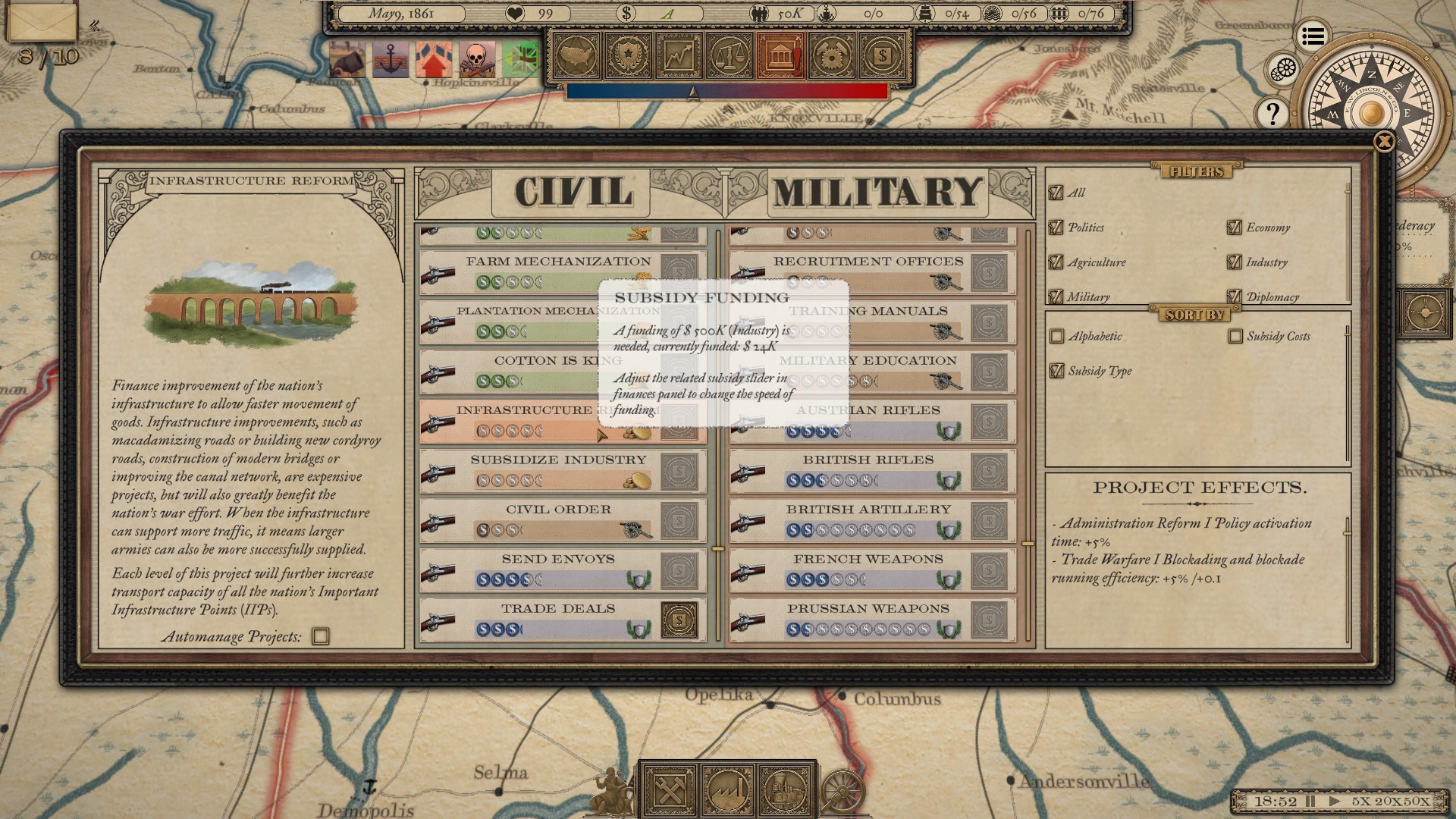 In the new Projects-panel, player can use the subsidies to finance different kinds of government projects, each requiring certain subsidy type. The projects are divided into civil and military projects, and some are one time, others repeating. For example, with military subsidies one can appoint new weapon types to be produced by the nation’s industry, or with diplomacy subsidies one can make weapon import deals.

These are one time projects. In the above screenshot, you can see one of the repeating projects. Each level of these repeating projects will increase the effects, but will also cost gradually more. Infrastructure Reform, the example shown, requires industry subsidies, and will increase transport capacity of all the nation’s IIPs (Important Infrastructure Points, that move goods around the campaign map). Once appointed, the next level will further increase the effects, but at a slightly higher cost.

The project effects will influence the nation’s war effort, and are powerful tools, but also expensive. It’s up to the player to figure out which projects to focus on, as subsidies are collected over time, and not everything can be done at any one time. 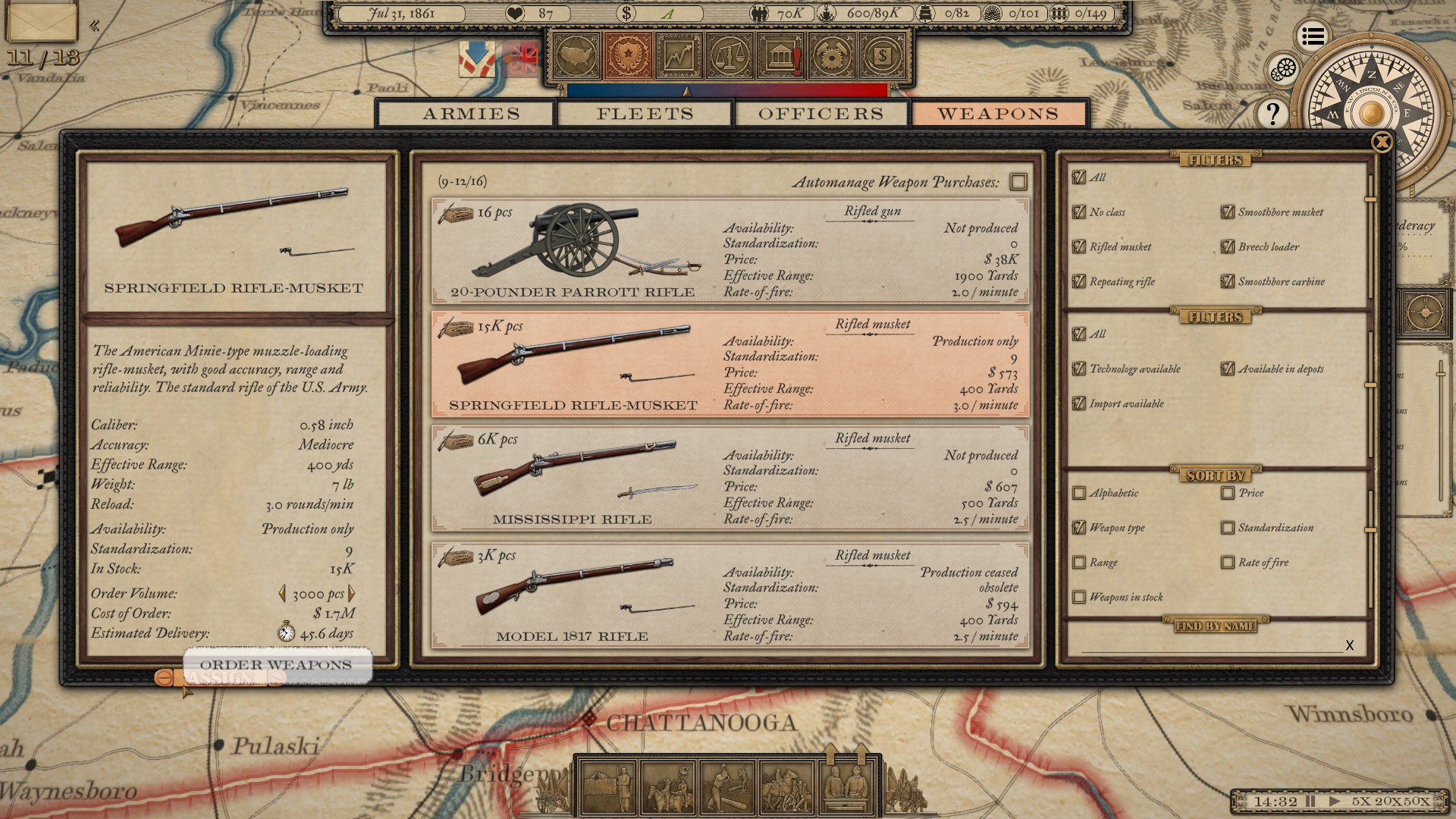 Changing the way weapon production works in the game has been one of the main requests from the community since the beginning. We did not want to make big changes so far, as it required stronger link between the economy and weapon production. With the overhauled economy model, it was finally time to change this as well.

In the above image you see a new Weapons-panel, which can be accessed via military management. Here, you can see all available weapons per type, including the actual numbers. There are weapons that are found currently in the nation’s depots, including those captured from the battle fields. Even if certain weapons are available, it does not mean they can be produced or imported — the projects are used for this.

Once a weapon type is available for the industry to produce, or an import deal is made, said weapons can be ordered. Player chooses the number of weapons to be produced, and places the order. Depending on the weapon type’s complexity, standardization, condition of industry (produced weapons), or available trade routes and relations (imported weapons), completion of the order will require certain amount of time and money. Once the order has been completed, the weapons become available, and can be handed over to recruited units.

So, from unlocking the weapon types directly via policies, and receiving new weapons to equip the units quite abstractly, the new system makes weapon production way more flexible and controlled. Players can, for example, try to unlock the best repeating rifles first. But the delays and costs need to be weighed carefully, as the economy now plays more important role in general. 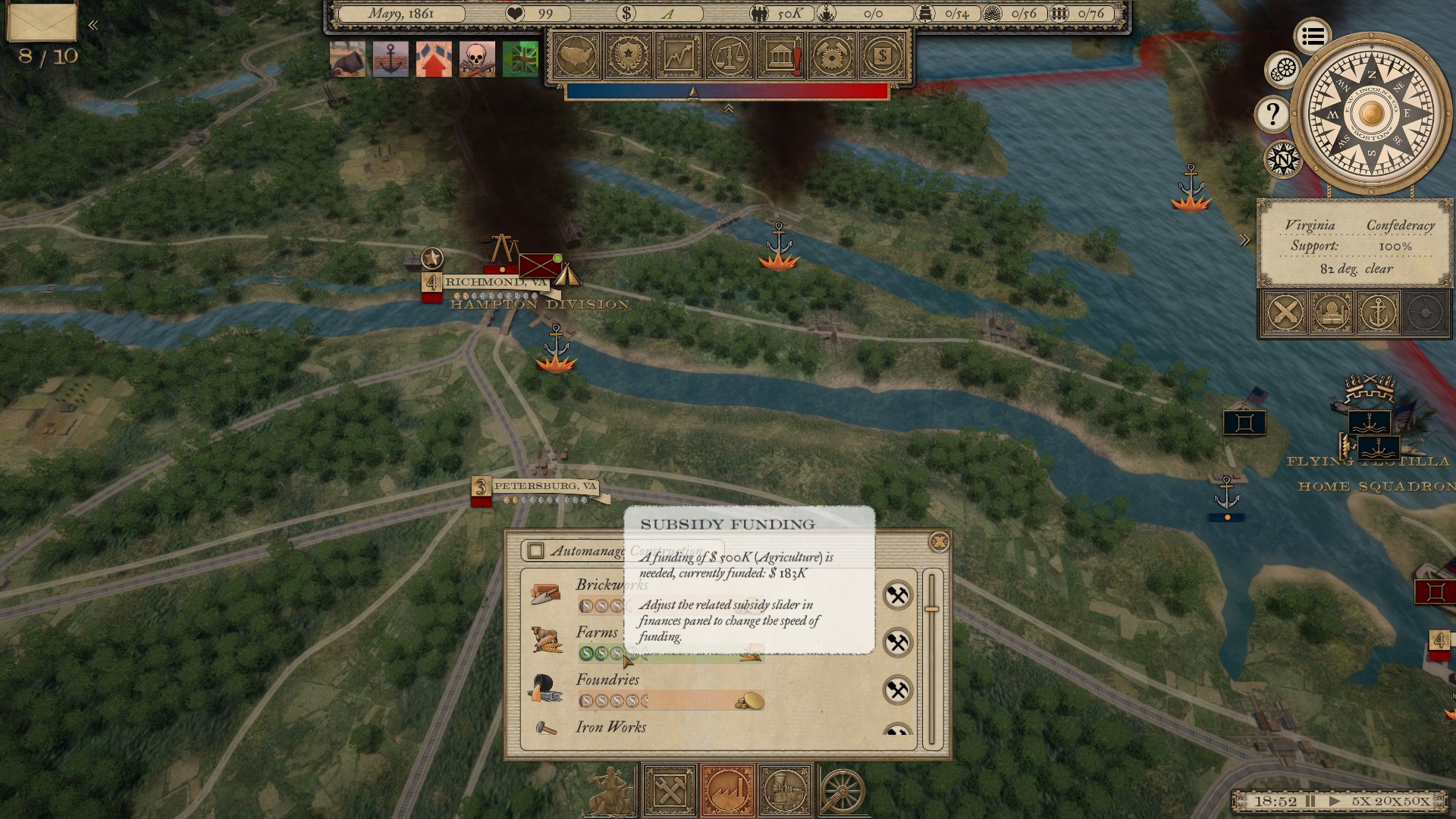 Another big change is the ability to construct buildings on the campaign map. When no army or fleet is selected, you can see new construction buttons in the bottom of the screen. There are three (3) types of construction options: government building, industries, railroads. Constructing railroads has not changed much from earlier versions of the game, except the location for the controls, and that subsidies can be used to cover the costs.

Government buildings are paid for using the nation’s treasury directly. Government buildings, such as national banks, POW camps, military hospitals and military academies, all have their effects in the war effort. For example, when capturing enemy soldiers in battle, if no POW camps are built, the field commanders will parole the prisoners, and many may return to their units to fight again. If POW camps with sufficient capacity exist, the prisoners can be moved there, and will be effectively out of the fight. But there are upkeep costs…

Industries, like railroads, can be funded with subsidies. When subsidies are available, construction is cheaper, as private investors and businessmen can be attracted more easily. If insufficient subsidies are available, these construction projects can still be ordered, but it will cost much more, and the funds are taken from the treasury directly. Similar payments (subsidies, or direct) can be used now to upgrade any of the existing industries throughout the campaign map. 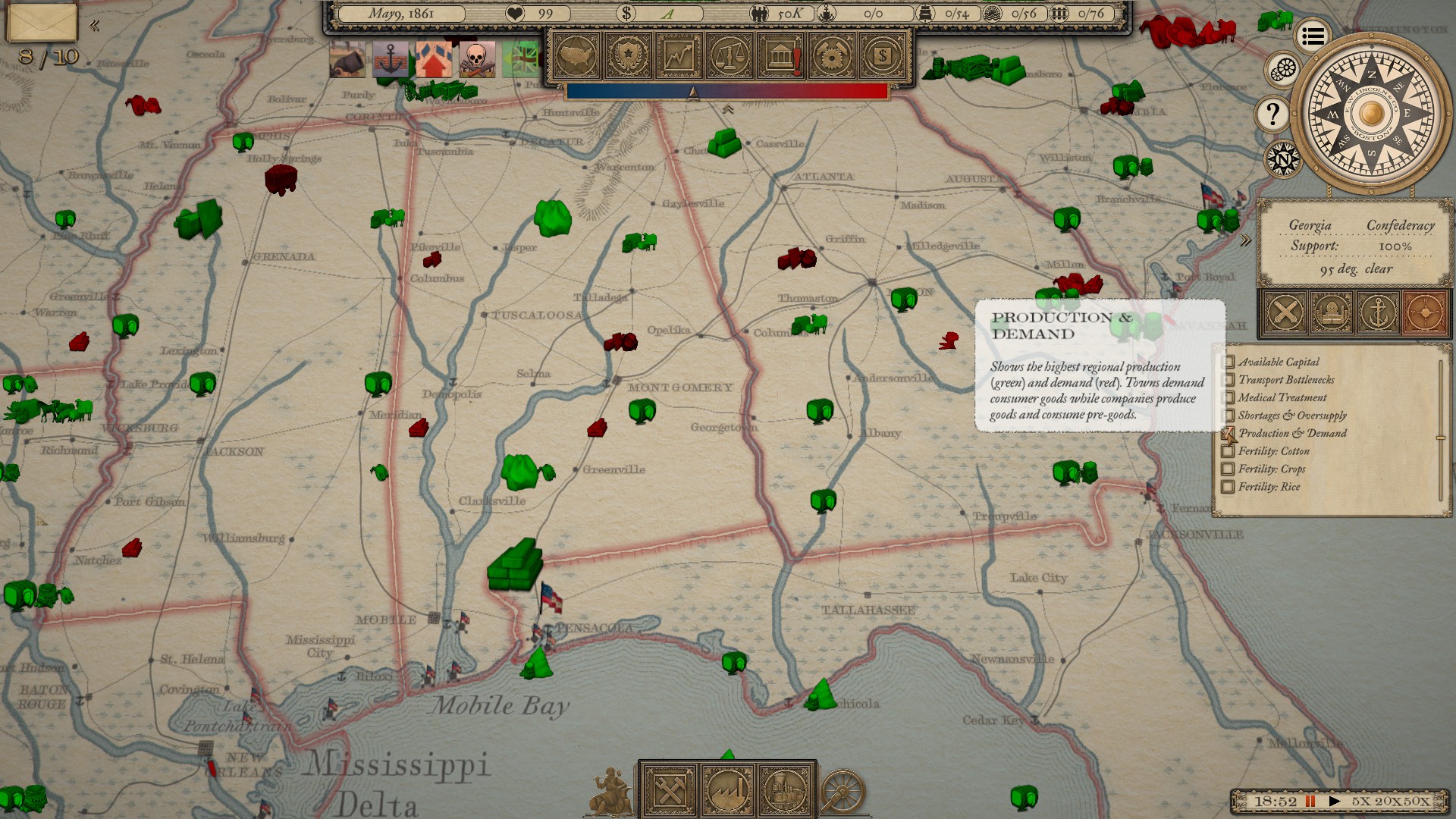 As the new construction options require further information, we have also added a number of new map filters to show information, that can be helpful when considering whether new buildings are needed, and where they would be most effective.

While all these changes increase the control player can have over the economy, all the mentioned functions can be placed under the AI Cabinet’s control (automanagement), in which case no further commands from the player are needed.