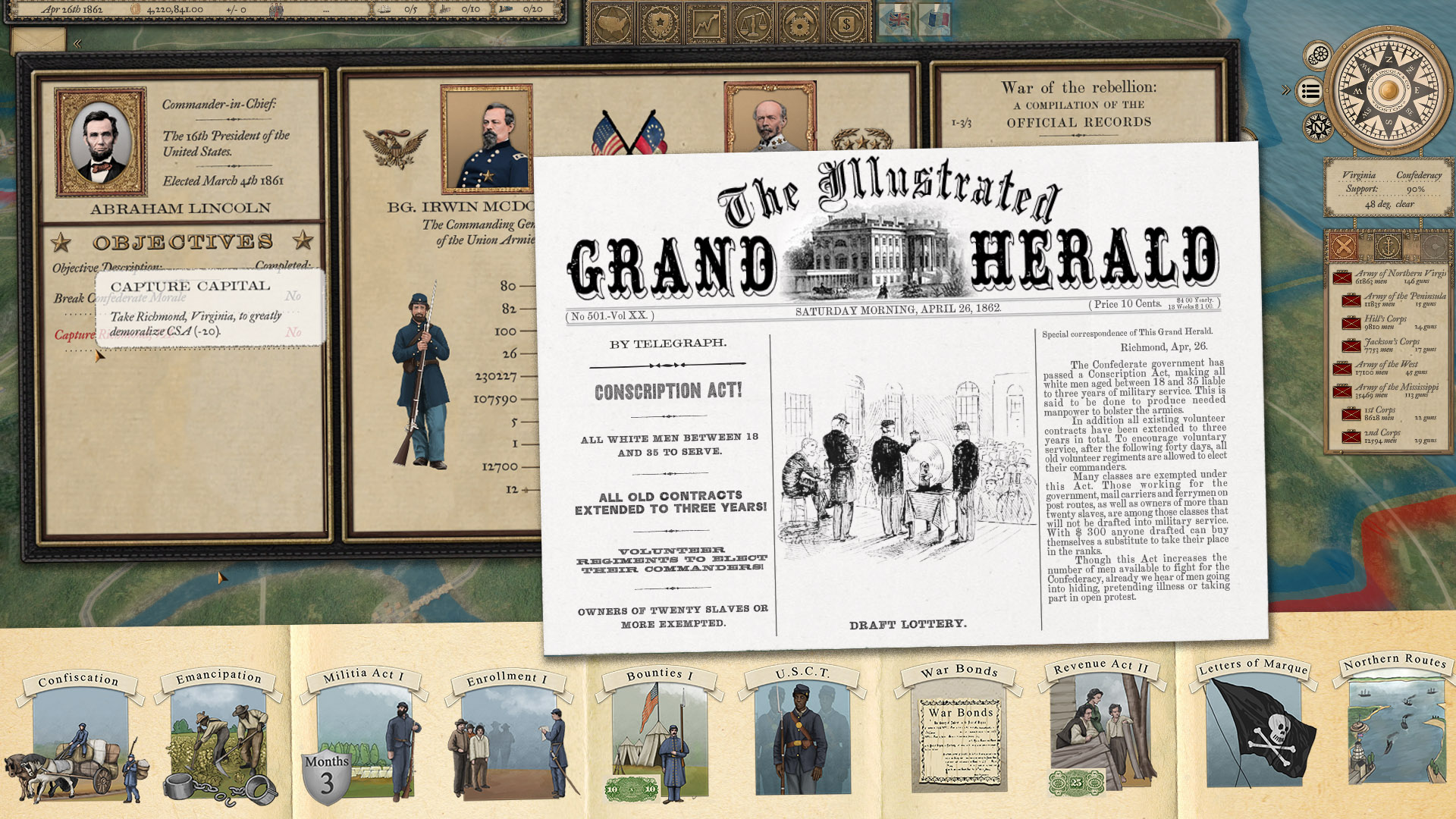 The American Civil War officially ended in May 1865, four long and bloody years after the rebellion turned into armed confrontation. Though it was quite clear from the onset that the Confederacy had no real chance for victory, it took four years and hundreds of thousands of casualties to finish the war of the rebellion. But, at many points, the war could have taken a very different turn – and that’s what Grand Tactician: The Civil War (1861-1865) is all about.

In our previous blog we discussed the story of the game, showing one of the chapter videos. The War, our main character, is divided into four chapters. Some followers of the blog were concerned we would use these chapters to steer the War along the historical lines, from 1st Manassas to Vicksburg to Petersburg, &c. But fear not! The chapters are there to carry the story, not the decisions made by the player.

Like revealed previously, each chapter will have some objectives to complete and to keep alive the war effort of your nation. Instead of directing the player to move certain direction, the objectives can be achieved in multiple ways. The main objective is to crush the enemy’s morale. Once the other side breaks, the game will end. This could happen early on in the game, or later than historically. It all depends on the campaign events, orchestrated by the player and the opposing AI.

Chapter I is the time before open hostilities, but the game cannot be won there. What’s the point of a Civil War game, if there is no Civil War? There are certain historical facts we are following to make sure the Civil War will erupt. For example, the southern player cannot simply choose to abolish slavery before secession – as then there most probably would not have been a secession in the first place? There will be a chance to do this later, though, but even then it’s not a simple thing to do, nor without drawbacks.

In Chapter II, as described in previous blog, there will be objectives to direct how the war will evolve. For example, winning the first major battle in the war will be an objective for both sides, and this battle will have more weight than any later battles in what comes to morale of the citizen. In general, the morale will continue to go down on both sides, the speed being dependent on campaign events like victories, losses, casualties… Some objectives will boost morale, for example by winning multiple consecutive battles, or taking the fight to the enemy’s territory.

Then there are historical objectives that player can try to achieve to gain the upper hand, like for Confederacy to capture border states and make them secede and officially join the Confederacy. In Chapters II and III there are also objectives to influence the Union elections. During the War there were two main elections: the House of Representatives election of 1862 and the presidential election of 1864. In either case, if Republicans, Mr. Lincoln’s party, would have lost, there would have been a chance of turmoil in Union policy making. If the Union support can be lowered enough, the elections will not play out as they did historically, and the nation would be further divided, driving the Union towards peace with Confederacy – which is one way for the south to win the game.

If events follow the historical lines, in the end, the war will end in exhaustion, with one side breaking first. And for the Confederacy, the underdog in the game, there is for example an objective to cause great enough casualties to make the northern spirits waver – even if own casualties would also be high.

Many readers of the Engineer Log have been asking about how we will implement research or politics in the game. Regarding the latter you see some hints above. But in the big picture we will not handle internal or partisan policies any further. This is something that happens in the background. Instead, we have a game mechanic called “policies”, where player can set the guidelines for his nation to follow.

The policies are linked to finances. Player, whose actions are government funded, will need money for the war effort. With the collected funds player will recruit and pay military upkeep, but there is more. With government subsidies player can influence the economy of the nation, trade, diplomatic relations with the European superpowers, recruiting, public order and policy making. From these, let’s take a closer look at the policies.

Both sides have a policy tree available, with some twenty policies and similar amount of acts in them. Policies provide certain bonuses to the nation, but only a limited number of them can be chosen at a time. This forces the player to prioritize, as he cannot have it all. Funding -branch of policies allows new means of collecting government funds, military policies allow new means of recruitment, and so on. With industrial focus player can unlock new weapon types to produce, and with diplomacy policies new imported weapon types become available. Each policy “branch” has multiple levels in it, and these levels are unlocked when moving to next Chapters. Player can change the policies to follow, but this will take some time, which simulates the political debate needed. Diverting money to policy making shortens the delays and allows more policies simultaneously.

Acts on the other hand are one time political decisions that player will need to live with for the rest of the game. You can see a number of Union Acts in the bottom row of the image above. Acts are not limited in number, but they can be accessed only via certain policy, act, or a combination. Each act will bring a benefit, but also some drawbacks, so choose wisely. For with Militia Acts, player can introduce longer contracts to volunteer service to make his armies more effective in the long run, but this will reduce the amount of men willing to volunteer. And when out of volunteers, there’s the possibility to introduce recruitment bounties, with more volunteers available for money, but also introducing disciplinary issues in the ranks. Or maybe one wishes to introduce conscription, allowing drafting…

The policies and acts also allow changing the course of history. The north could end up with great relations with the natives or Europeans, while the south could try to industrialize and, at a later stage, even moderate or abolish slavery, with the possibility to recruit Confederate States Colored Troops. But, like said, all this will come with a price, and could also cause the player’s side to lose the game in the long run!

Like described, player has a manageable amount of tools available to change the course of history without the need to micromanage minor details. But, if the player feels even this is too much responsibility to bear, both the finances and policies can be given to the AI to handle.